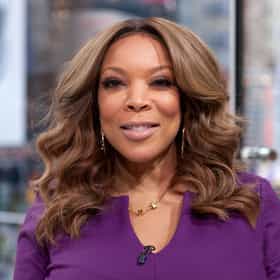 Wendy Joan Williams Hunter (born July 18, 1964) is an American television and radio presenter, businesswoman, writer, actress, fashion designer, and media personality. She has hosted the nationally syndicated television talk show The Wendy Williams Show since 2008. Prior to television, Williams was a radio DJ and host and quickly became known in New York as a "shock jockette". She gained notoriety for her on-air spats with celebrities and was the subject of the 2006 VH1 reality TV series The Wendy Williams Experience which broadcast events surrounding her radio show. She was inducted into the National Radio Hall of Fame in 2009. She has written a New York Times best-selling ... more on Wikipedia

Every Man Wendy Williams Has Dated 4.4k views Who has Wendy Williams dated? Like all people in the spotlight, Williams has had her share of public relationships. Wendy Wi...

Wendy Williams is ranked on...

#462 of 1,043 Celebrity Death Pool 2020 36k VOTES They may be beloved performers, award winners, or game changers, but no matter how famous, you can’t escape death. This cele...
#20 of 348 Popular Things You're Just Not Interested In 183.5k VOTES Face it, when it comes to solid taste, majority doesn't always rule. It's time to take a good long look at popular thin...
#330 of 571 Things That Are Not As Cool As People Think They Are 1.1M VOTES Jorts are the dumbest things I've ever seen. Next to Toms shoes. Next to the Toyota Prius. Next to d-bags taking pictures of...
#32 of 56 The Best Female Talk Show Hosts on TV 1.2k VOTES Though the field is expanding, most of the best female talk show hosts are the faces we see and the voices we hear on mornin...
#25 of 42 The Best Black Reality TV & Game Show Judges 1.1k VOTES Reality TV and game show judges control the chaos of unscripted television. The best black reality TV hosts and judges have ...
#734 of 868 Celebrity Death Pool 2016 370.1k VOTES Celebrity death pool 2016: Here's a large list of celebrities we think just might die this year. The only certainties in l...
#2 of 28 The Best Black Female Talk Show Hosts In TV History 160 VOTES Talk show hosts control conversations about everything from politics to relationships. The best black female talk show hosts...
#16 of 29 The Very First Tweets From TV Stars 285 VOTES Celebrities let you know everything about themselves with the help of Twitter. Sometimes they are the exact persona you are ...
Famous People Whose Last Name Is Williams 12.2k VIEWS Being a fairly common name, it's no surprise there are a lot of famous people with the last name Williams. Do you recognize ...
21 Celebrities Who Are Picky Eaters 198.7k VIEWS Broccoli is gross. Pizza is great. And in a perfect world, ice cream would be a super food. Because celebrities are so focus...
Celebrity Couples Who Broke Up In 2019 14.5k VIEWS UPDATED: Check out celebrity couples who broke up in 2020.  It's not that people love bad news, but celebrity breakup...
Famous People Named Wendy 13k VIEWS List of famous people named Wendy, along with photos. How many celebrities named Wendy can you think of? The famous Wendys b...
Celebrities Who Wear Wigs 473.3k VIEWS List of celebrities who wear wigs (with photos), loosely ranked by fame and popularity by crazy hair-loving fans like you....
#47 of 47 The 35+ Funniest Black Female Comedians 10.4k VOTES If laughter is the best medicine, these famous women are some of the best doctors around. These are the funniest black femal...
Female Celebrities Who Are 5’10" 9.3k VIEWS This list contains examples of female celebs who are 5'10" loosely ranked by fame and popularity. Standing above the av...

Wendy Williams is also found on...