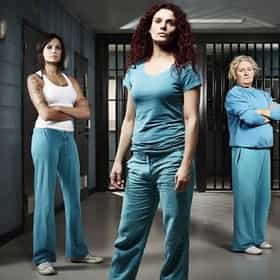 Wentworth is an Australian television drama series. It was first broadcast on SoHo on 1 May 2013. The series serves as a contemporary reimagining of Prisoner, which ran on Network Ten from 1979 to 1986. Lara Radulovich and David Hannam developed Wentworth from Reg Watson's original concept. The series is set in the modern day and centres on Bea Smith's early days in prison. Wentworth is filmed on a purpose built set in the suburb of Clayton. It has received a mostly positive reception from critics, and the first episode became the most watched Australian drama series premiere in Foxtel history. The series was picked up by several countries, including New Zealand and the UK, where it ... more on Wikipedia

Wentworth is ranked on...

#240 of 780 The Best TV Shows to Binge Watch 1.2M VOTES Bored? Not anymore! These are the best TV shows for binge-watching. The greatest television shows in the world are ranked he...
#22 of 76 The Best Current TV Shows No One Is Watching 300.5k VOTES Some of the best shows on TV right now in 2019 are criminally underrated and not watched by nearly enough people. Sure, you'...
#100 of 196 The Greatest TV Shows for Women 117.9k VOTES Behold, a complete list of the greatest TV shows for women, ranked by ladies who love to watch television! For stay-at-home ...
#11 of 56 The Best Current TV Shows with Gay Characters 26.5k VOTES Gay characters on TV shows have come a long way since the days of All in the Family when a character named Steve shocked the...
#15 of 260 The Best Female-Led TV Shows 24.3k VOTES While society has by no means reached actual equality, in the last few years television viewers have started to see an uptic...
#386 of 400 TV Shows That Only Smart People Appreciate 1.2M VOTES Since about the early 2000s, TV audiences have been blessed with what many experts call The Golden Age of Television. In oth...
#21 of 59 The Best TV Reboots & Revivals 19.3k VOTES This list contains information about the best TV reboots, ranked from best to worst by user votes. The top TV reboots come i...
#1 of 22 The Best '80s TV Reboots 448 VOTES The 1980s were truly something special, which is probably why there's been quite a few 80s TV reboots. From hilarious comedi...
#2 of 72 The Best Current Crime Drama Series 5.8k VOTES In to crime shows? Well, here are the best current crime drama TV shows of 2019, ranked by user votes. From some good c...
#7 of 32 The Best Current Shows That Are Darker Than Night 1.4k VOTES Some television viewers enjoy diving into the dark underbelly of society or the human psyche. There are plenty of horror pro...
#6 of 131 The Best TV Dramas On Netflix 9.3k VOTES Here are the best television drama series streaming now on Netflix. Whether you're looking for courtroom dramas, police proc...
#87 of 362 The Best Streaming Netflix TV Shows 5.3M VOTES The best streaming Netflix TV shows include some great television dramas, sci-fi/adventure shows, sitcoms, and reality TV pr...
#6 of 48 The Best LGBTQ+ Shows & Movies of All Time 3.1k VOTES One of the least-represented groups in the population to be seen in film and television have been the LGBTQ+ community. For ...
#4 of 51 The Best Shows For Women On Netflix 3.3k VOTES Whether they feature strong female leads or simply cater to the ladies, the best shows for women on Netflix are aplenty. So&...
#2 of 41 The Greatest Prison Shows & Movies of All Time 796 VOTES If there's one thing nobody wants, it's to be thrown into a prison. Our desire to keep as far away from these places doesn't...