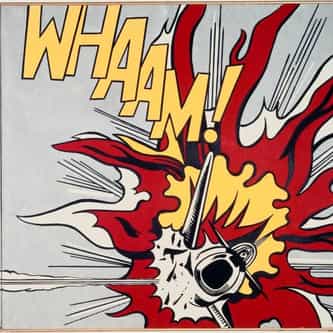 Whaam! is a 1963 diptych painting by the American artist Roy Lichtenstein. It is one of the best-known works of pop art, and among Lichtenstein's most important paintings. Whaam! was first exhibited at the Leo Castelli Gallery in New York City in 1963, and purchased by the Tate Gallery, London, in 1966. It has been on permanent display at Tate Modern since 2006. The left-hand panel shows a fighter plane firing a rocket that, in the right-hand panel, hits a second plane which explodes in ... more on Wikipedia