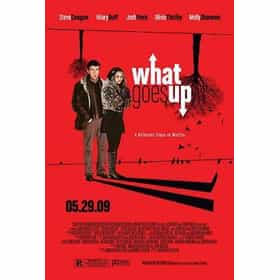 What Goes Up is an American comedy-drama film distributed by Sony Pictures Entertainment starring Hilary Duff, Steve Coogan, Josh Peck, Olivia Thirlby, and Molly Shannon, directed by Jonathan Glatzer and co-written by Glatzer and Robert Lawson. Coogan also serves as an executive producer. It premiered on May 8, 2009 at the 3rd Annual Buffalo Niagara Film Festival. What Goes Up was released in the US through Sony Pictures and Three Kings Productions in select theaters on May 29, 2009 and expanded to more theaters the following week. Cities included Los Angeles, New York, Las Vegas, Buffalo, Boston and Chicago. The movie grossed $5,290 in its opening weekend. ... more on Wikipedia

What Goes Up is ranked on...

What Goes Up is also found on...