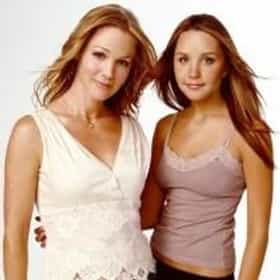 What I Like About You is an American television sitcom set mainly in New York City, following the lives of two sisters, older-sister Valerie Tyler and teenager-sister Holly Tyler. The series ran on The WB from September 20, 2002, to March 24, 2006, with a total of 86 episodes produced. With the exception of a brief period early in the second season, What I Like About You was a headline on The WB's Friday Night Comedy Lineup. ... more on Wikipedia

#914 of 2,286 The Greatest TV Shows Of All Time 1.4M VOTES Choosing the best TV shows of all time means taking into account the best TV dramas, the best TV comedies, the best cartoons...
#195 of 292 People who voted for What I Like About You... People Age 30 to 49 are 2x more likely to vote for this also upvote James Bond Franchise on Every James Bond Movie, Ranked Best to Worst The Greatest Sitcoms in Television History 938.7k VOTES Best sitcoms ever to air on television includes some of the greatest sitcoms of all time as ranked by fans of TV. What's the...
#370 of 385 The Best TV Shows of The Last 20 Years 1.5M VOTES This best TV show list represents the combined opinions of thousands of TV fans. Anyone can vote on this list of the best TV...
#107 of 260 The Best Female-Led TV Shows 24.3k VOTES While society has by no means reached actual equality, in the last few years television viewers have started to see an uptic...
#586 of 1,328 The Best Guilty Pleasure TV Shows 19.5k VOTES List of the best guilty pleasure TV shows, past and present, including sitcoms, dramas, reality shows, and game shows. These...
#108 of 476 The Best Television Shows of the 2000s 144k VOTES Some great TV shows came out of the 2000s, while some have even lived on. Here's a list of the best shows that aired from 20...
#83 of 105 The Best TV Shows Set In New York City 1.7k VOTES If you love New York then you're in luck because it is a very popular setting for a television series. It's not just that it...
#8 of 80 The Best WB Television Network TV Shows/Programs 2.9k VOTES For many of us, shows on the WB were responsible for informing our early years, teaching us that love is complicated, your f...
#6 of 27 The Best The N TV Shows 2.2k VOTES List of popular The N shows, ranked from best to worst. This list of the top The N TV series, both current and cancelled sho...
#8 of 40 The Greatest TV Shows About Sisters 568 VOTES What do you think are the best shows about sisters? Many of us have one, but there aren't as many popular TV shows about sis...

What I Like About You is also found on...