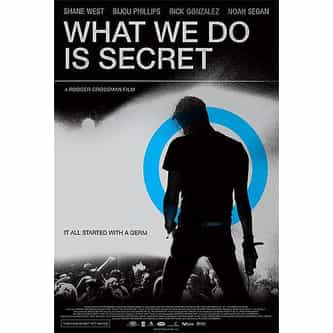 What We Do Is Secret

What We Do Is Secret is a 2007 American biographical film about Darby Crash, singer of the late-1970s Los Angeles punk rock band Germs. Rodger Grossman directed the film and wrote the screenplay, based on a story he had written with Michelle Baer Ghaffari, a friend of Crash's and co-producer of the film. Shane West stars as Crash, while Rick Gonzalez, Bijou Phillips, and Noah Segan respectively portray Germs members Pat Smear, Lorna Doom, and Don Bolles. The film follows the formation and ... more on Wikipedia

What We Do Is Secret IS LISTED ON