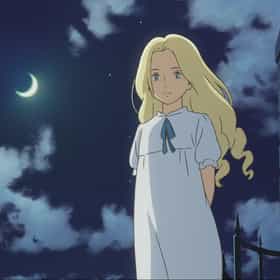 When Marnie Was There

When Marnie Was There is a 2014 Japanese anime film written and directed by Hiromasa Yonebayashi, produced by Studio Ghibli, and based on the novel When Marnie Was There by Joan G. Robinson. It was released on 19 July 2014. It was the final film for Studio Ghibli before they announced that the film division is taking a short hiatus after The Tale of the Princess Kaguya, and the retirement of Hayao Miyazaki a year before the film was released. This is potentially the last feature film to be released by Studio Ghibli. The film was released on Blu-ray and DVD in Japan on 18 March 2015. ... more on Wikipedia

When Marnie Was There is ranked on...

#314 of 600 The Best Animated Films Ever 926.5k VOTES The best animated movies of all time are an assortment of animated movies that rank among the best movies ever made. Wh...
#223 of 318 The Best English Dubbed Anime of All Time 969.2k VOTES If you're one of those people who only watches anime in Japanese, we don't blame you. English dubs can really ruin a series ...
#85 of 94 The Best Movies for Young Girls 68k VOTES The films on this list of the best movies for girls have been ranked as the absolute best by the community, when it comes to...
#8 of 27 The Best Anime Like Wolf Children 234 VOTES Being a single parent is an incredibly difficult job, but it only gets worse when your children can turn into wolves. Wolf C...
#3 of 11 11 Super Underrated Studio Ghibli Movies You Probably Haven't Seen 4.2k VOTES So you own a Totoro plushie, made your own soot sprites, and named your cat after Jiji from Kiki’s Delivery Service, but hav...
#6 of 11 11 Great Studio Ghibli Films Not Directed By Hayao Miyazaki 1.3k VOTES Studio Ghibli and Hayao Miyazaki are often seen as synonymous, but there are plenty of masterpieces under the Ghibli&nb...
#11 of 22 Amazing Japanese Kids Movies You Should Watch 1.8k VOTES Sometimes big budget children's films leave a lot to be desired, but Japanese kids' films often prove to be thoughtful, in...
#13 of 13 The Best Anime Like The Wind Rises 44 VOTES Anime based off of real-life stories can sometimes be hard to come across, especially since sci-fi and fantasy themes tend t...
#21 of 25 The Best Anime Like Only Yesterday 11 VOTES Moving away from your family to start a new life is always a stressful option; you never really know what you're missing unt...
#30 of 1,079 The Best Anime Movies of All Time 117.8k VOTES A list of all the best anime movies ever made, many of which are streaming on Netflix and Amazon Prime. This anime movie lis...
#13 of 15 Best Hailee Steinfeld Movies 545 VOTES List of the best Hailee Steinfeld movies, ranked best to worst with movie trailers when available. Hailee Steinfeld's h...
#15 of 20 The Best Studio Ghibli Movies 12.6k VOTES Here is a list of the best Studio Ghibli movies, ranked by fans and casual critics. Founded in Toyko in 1985, Studio Gh...
#11 of 24 The Best PG Anime Movies of All Time, Ranked 902 VOTES The best PG anime movies are great for audiences of all ages, unlike super violent animes such as Attack on Titan. They prov...
#9 of 13 The Best Anime Like Orange 285 VOTES Orange is a Summer 2016 anime that left a lot of viewers sobbing by the end of it. One day, Naho Takemiya begins receiv...
#33 of 60 The Best Drama Movies With A Supernatural Twist 634 VOTES Looking for dramatic movies that have a supernatural twist? These are the best supernatural drama movies the hybrid genre ha...