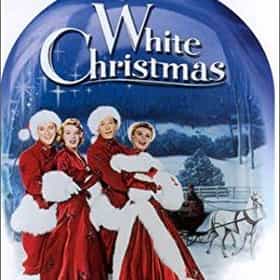 White Christmas is a 1954 American musical romantic comedy film directed by Michael Curtiz and starring Bing Crosby, Danny Kaye, Rosemary Clooney, and Vera-Ellen, loosely based on the 1942 film Holiday Inn. Filmed in Technicolor, it features the songs of Irving Berlin, including a new version of the title song, "White Christmas", introduced by Crosby in the earlier film. Produced and distributed by Paramount Pictures, the film is notable for being the first to be released in VistaVision, a widescreen process developed by Paramount that entailed using twice the surface area of standard 35mm film; this large-area negative was used to yield finer-grained standard-sized 35mm ... more on Wikipedia

White Christmas is ranked on...

#1011 of 1,699 The Most Rewatchable Movies 3.5M VOTES There are some movies that I always stop at and watch if I see them on TV or I can put in the DVD player and watch when I'm ...
#172 of 804 People who voted for White Christmas... People in the Midwest are 2x more likely to vote for this The Greatest Chick Flicks Ever Made 423.4k VOTES Here's a list of the greatest chick flicks ever, ranked by fans and casual critics like you. The best girl movies are those ...
#329 of 410 The Best Rainy Day Movies 178.7k VOTES For many, rainy days are no fun—but it doesn't have to be that way. A great way to spend such days is watching movies, ...
#4 of 55 The Best Christmas Rom-Coms 2k VOTES The Christmas season is a practically perfect setting for a romantic comedy. There are quirky families to meet, hopeful Chri...
#3 of 201 The Best Movies of 1954 4.2k VOTES List of the best movies of 1954, with movie trailers when available. Film legends Paul Newman and Jack Lemmon made their big...
#11 of 153 The Best PG Musical Movies 3.4k VOTES   List of PG musical movies, ranked from best to worst with movie trailers when available. This list takes the best P...
#1 of 65 The Greatest Musical Comedies, Ranked 5.9k VOTES   Like spaghetti and meatballs and peanut butter and jelly, music and comedy are a match made in heaven. The best mus...
#2 of 18 The Best Musicals Streaming On Netflix 1.2k VOTES While by no means comprehensive, Netflix does have an interesting list of musicals that are currently streaming on the servi...
#1 of 68 The Best Bing Crosby Movies 2.5k VOTES List of the best Bing Crosby movies, ranked best to worst with movie trailers when available. Bing Crosby may be best known ...
#17 of 41 The Best Movies About Sisters 2.2k VOTES There’s nothing quite as powerful as the bond between sisters – although sometimes there’s nothing more complicated than sib...
#1 of 11 The Best '50s Christmas Movies 504 VOTES The weather outside is frightful, but the best '50s Christmas movies are here to keep you warm and cozy during the...

White Christmas is also found on...