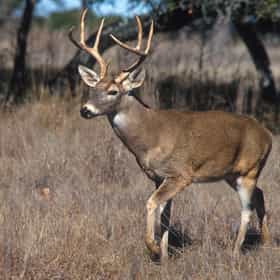 The white-tailed deer (Odocoileus virginianus), also known as the whitetail or Virginia deer, is a medium-sized deer native to the United States, Canada, Mexico, Central America, Ecuador, and South America as far south as Peru and Bolivia. It has also been introduced to New Zealand, Cuba, Jamaica, Hispaniola, the Bahamas, the Lesser Antilles, and some countries in Europe, such as Finland, the Czech Republic, Romania and Serbia. In the Americas, it is the most widely distributed wild ungulate. In North America, the species is widely distributed east of the Rocky Mountains as well as in southwestern Arizona and most of Mexico, aside from Lower California. It is mostly replaced by the ... more on Wikipedia

White-tailed Deer is ranked on...

#83 of 214 The World's Most Beautiful Animals 159.7k VOTES What are the world's most beautiful animals? This list includes some of the most stunning, exotic, and truly gorgeous animal...
#9 of 12 The Best Animals To Hunt For Beginners 51 VOTES When you decide you want to start hunting, you definitely don't want to jump into it by trying to take out a grizzly bear wi...
38 Incredible Albino (and Leucistic) Animals 4.5M VIEWS Albino animals have a genetic mutation that causes an absence of tyrosinase in their pigment cells, which means they don't...