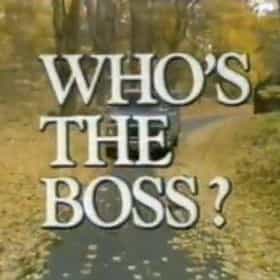 Who's the Boss? is an American sitcom created by Martin Cohan and Blake Hunter, which aired on ABC from September 20, 1984 to April 25, 1992. Produced by Embassy Television, in association with Hunter-Cohan Productions, and Columbia Pictures Television, the series starred Tony Danza as a retired major league baseball player who relocates to Fairfield, Connecticut to work as a live-in housekeeper for a divorced advertising executive, played by Judith Light. Also featured were Alyssa Milano, Danny Pintauro and Katherine Helmond. The show received positive reviews throughout most of its run, becoming one of the most popular sitcoms of the mid-to-late-1980s. The series was nominated for ... more on Wikipedia

#358 of 2,297 The Greatest TV Shows Of All Time 1.5M VOTES Choosing the best TV shows of all time means taking into account the best TV dramas, the best TV comedies, the best cartoons...
#158 of 590 The Best TV Theme Songs of All Time 323.2k VOTES The best TV theme songs and TV intros of all time will take you back to some of the greatest moments in TV. Television theme...
#91 of 295 People who voted for Who's the Boss?... also upvote Star Wars Franchise on The Greatest Sci-Fi Movies of All Time also upvote Star Trek Franchise on The Best Space Movies The Greatest Sitcoms in Television History 957.7k VOTES Best sitcoms ever to air on television includes some of the greatest sitcoms of all time as ranked by fans of TV. What's the...
#55 of 158 Shows with the Best Freakin' Series Finales of All Time 264.6k VOTES This list of the best series finales in television is a somber reminder that no matter how much you love a TV character or a...
#51 of 204 The Most Important TV Sitcoms 82.5k VOTES These sitcoms are important because they either influenced a generation's culture or because they permanently influenced the...
#16 of 66 The Best ABC Shows of All Time 20.2k VOTES   List of the best ABC shows of all time, ranked by fans who watch them live or as re-runs. Since its acceptance into...
#10 of 33 20+ 1980s Sitcoms That Will Still Make You Laugh 9.1k VOTES From Blair Warner's feathered hair to Julia Sugarbaker's face-swallowing bifocals, from Rose Nylund's St. Olaf stories to De...
#160 of 422 The Best TV Shows to Rewatch 133.5k VOTES List of the best TV shows to rewatch, as ranked by television fans and critics. When the weekend comes around and you can’t ...
#42 of 114 The Best Shows About Families 14.2k VOTES The best shows about families are those sitcoms and family shows that give us a break from our own families and give us a pe...
#12 of 242 The Best 1990s ABC Shows 13.9k VOTES Go back to the days of acid wash jeans with this list of '90s ABC shows, ranked from best to worst by nostalgic TV viewers. ...
#8 of 72 The Best Romantic Comedy TV Shows 70.1k VOTES The very best romantic comedy shows on television are a little bit of funny and a whole lotta love. Popular romantic comedy ...
#2 of 36 The Best 1980s ABC Shows 2.7k VOTES Remember the '80s? 1980s ABC shows, specifically? You're about to, because this list of '80s ABC shows ranks the network's s...
#28 of 43 The Best Comedy Shows About Big Families 1.5k VOTES Large families are the perfect subjects to create sitcom gold. The best big family comedy shows feature diverse characters b...
#9 of 36 The Greatest TV Shows About Parenting 1k VOTES Which TV shows about parenting do you think are best? While there are countless manuals, books, and detailed guides people c...
#11 of 22 The Best 1980s ABC Comedy Shows 540 VOTES Take a stroll down memory lane with the best 1980s ABC comedy shows, ranked by user votes. The best '80s ABC comedy shows ca...

non binary celebrities, is ari a jewish name, hart of dixie, jeff foxworthy show, kenichi the mightiest disciple characters, how many seasons of jane the virgin, home and away past characters, age of cast members of big bang theory, comedy mystery movies, best korean drama of all time