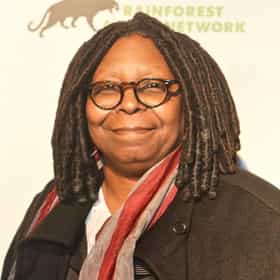 Caryn Elaine Johnson (born November 13, 1955), known professionally as Whoopi Goldberg (), is an American actor, comedian, author, and television personality. She has been nominated for 13 Emmy Awards and is one of the few entertainers to have won an Emmy Award, a Grammy Award, an Academy Award, and a Tony Award (EGOT). She is the second black woman to win an Academy Award for acting.Goldberg's breakthrough came in 1985 for her role as Celie, a mistreated woman in the Deep South, in Steven Spielberg's period drama film The Color Purple, for which she was nominated for the Academy Award for Best Actress and won her first Golden Globe Award. For her performance in the romantic fantasy ... more on Wikipedia

Whoopi Goldberg is ranked on...

Whoopi Goldberg is also found on...