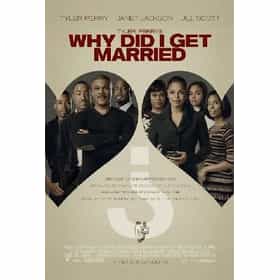 Why Did I Get Married?

Why Did I Get Married? is a 2007 comedy-drama film adaptation written, produced, directed, and starring Tyler Perry, which was inspired by his play of the same name. The film stars Janet Jackson, Jill Scott, Malik Yoba, Sharon Leal, Tasha Smith, Michael Jai White, Richard T. Jones, and Keesha Sharp. The film was released in the United States by Lionsgate on October 12, 2007. The film is about the difficulty of maintaining a solid relationship in modern times. Eight married college friends plus one other non-friend go to Colorado for their annual week-long reunion, but the mood shifts when one couple's infidelity comes to light. Secrets are revealed and each couple begins to question ... more on Wikipedia

Why Did I Get Married? is ranked on...

Why Did I Get Married? is also found on...