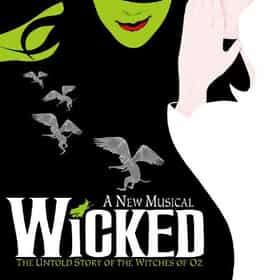 Wicked: The Untold Story of the Witches of Oz is a musical with music and lyrics by Stephen Schwartz and book by Winnie Holzman. It is based on the 1995 Gregory Maguire novel Wicked: The Life and Times of the Wicked Witch of the West, an alternative telling of the 1939 film The Wizard of Oz and L. Frank Baum's classic 1900 story The Wonderful Wizard of Oz. The musical is told from the perspective of the witches of the Land of Oz; its plot begins before and continues after Dorothy's arrival in Oz from Kansas and includes several references to the 1939 film and Baum's novel. Wicked tells the story of two unlikely friends, Elphaba and Glinda the Good, who struggle through opposing ... more on Wikipedia

The Best Songs in Wicked, Ranked by Singability 2.6k votes There's nothing like dancing through life and singing the best songs from Wicked. Adapted from Winnie Holzman's novel, the B...

Wicked is ranked on...

#191 of 341 Popular Things You're Just Not Interested In 191k VOTES Face it, when it comes to solid taste, majority doesn't always rule. It's time to take a good long look at popular thin...
#3 of 25 The Best Broadway Shows Right Now 6.6k VOTES This list contains all of the hottest Broadway shows currently playing, including plays and musicals. You might also be inte...
#3 of 52 The Best Broadway Musicals of the 2000s 8.2k VOTES What are the best Broadway shows today? This has been ranked by theater lovers to determine the top Broadway musicals from t...
#7 of 45 The Greatest Musicals That Started Off-Broadway 3.9k VOTES Although many people might not be aware - it’s true. Some of the greatest, most beloved Broadway musicals started out as o...

Wicked is also found on...

The Most Popular Broadway Musicals of All Time