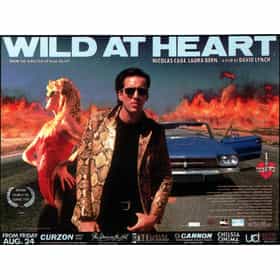 Wild at Heart is a 1990 American thriller film written and directed by David Lynch, and based on Barry Gifford's 1989 novel of the same name. Both the book and the film revolve around Sailor Ripley and Lula Pace Fortune, a young couple from Cape Fear, North Carolina who go on the run from her domineering mother. Due to her mother's machinations, the mob becomes involved. Lynch was originally going to produce, but after reading Gifford's book decided to also write and direct the film. He did not like the ending of the novel and decided to change it in order to fit his vision of the main characters. ... more on Wikipedia

Wild at Heart is ranked on...

Wild at Heart is also found on...