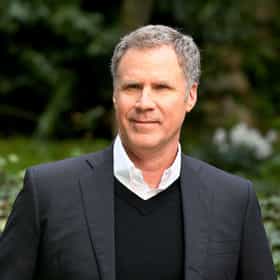 John William Ferrell (; born July 16, 1967) is an American actor, comedian, producer, writer and businessman. He first established himself in the mid-1990s as a cast member on the NBC sketch comedy show Saturday Night Live, and has subsequently starred in comedy films such as Anchorman: The Legend of Ron Burgundy (2004), Talladega Nights (2006), Step Brothers (2008), The Other Guys (2010) and Anchorman 2: The Legend Continues (2013), all but one of which he co-wrote with his comedy partner Adam McKay. The two also founded the comedy website Funny or Die in 2007. Other film roles include Elf, Old School (both 2003), Blades of Glory (2007), Daddy's Home (2015), and the animated films ... more on Wikipedia

lists about Will Ferrell

Jim Carrey
Fun Facts You Didn't Know About Will Ferrell 1.8M views Will Ferrell is a comedy icon. Audiences were first introduced to his loud, brash, reckless-abandon style of comedy on Satur...
The Best Will Ferrell Movies 23.5k votes This list of the best Will Ferrell movies is ranked best to worst and includes movie trailers when available. Whether he is ...
The Best Will Ferrell Characters of All Time 12.5k votes Will Ferrell characters list, ranked from best to worst with clips from the movie when available. These Will Ferrell roles i...
Anchorman Movie Quotes 228 votes Here are the best "Anchorman" quotes, including some of the funniest and most used Will Ferrell quotes of all time...
The Best of Will Ferrell's SNL Characters 199 votes In the four decades since Saturday Night Live first aired in 1975, the series' cultural reach has been one of its defining l...
Will Ferrell And Kristen Wiig's Lifetime Movie Is The Best Prank They Ever Pulled 14.2k views Will Ferrell and Kristen Wiig are two of the greatest Saturday Night Live cast members in the show's history, and two establ...
Casa de Mi Padre Movie Quotes 54 votes The best 'Casa de Mi Padre' movie quotes include the funniest lines from this new Spanish-language comedy film starring Will...

Will Ferrell is ranked on...

Will Ferrell is also found on...