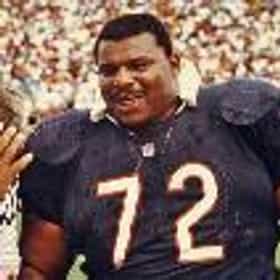 William Anthony Perry (born December 16, 1962) is an American former professional football player who was a defensive lineman in the National Football League (NFL) for ten seasons during the 1980s and 1990s. Perry played college football for Clemson University, and was recognized as an All-American. He was selected in the first round of the 1985 NFL Draft, and played professionally for the Chicago Bears and Philadelphia Eagles of the NFL. In reference to his imposing size, he was popularly known as "The Refrigerator" or, abbreviated, "The Fridge". Perry also occasionally played at fullback at the goal line due to his size and power. ... more on Wikipedia

William Perry is ranked on...

#242 of 1,042 Celebrity Death Pool 2020 42.4k VOTES They may be beloved performers, award winners, or game changers, but no matter how famous, you can’t escape death. This cele...
#82 of 350 People Who Should Be in the Pro Football Hall of Fame 75.4k VOTES People who should be in the Pro Football Hall of Fame include those talented and legendary NFL players, coaches, owners and ...
#149 of 157 Ranking The Greatest WWE Hall of Fame Inductees 6.9k VOTES Every WWE Hall of Fame inductee, ranked by wrestling fans around the world. Since 1993, the WWE has been honoring some of th...
#169 of 1,540 The Best Football Players Ever 1M VOTES One of the hot topics of debate not only among NFL fans but pundits as well is who is the best football player of all time. ...
#1 of 79 The Best NFL Player Nicknames 2.8k VOTES The best NFL player nicknames evoke everything you need to about the kind of player you're talking about. Whether you're dis...
#20 of 140 People who voted for William Perry... also upvote James Bond Franchise on Every James Bond Movie, Ranked Best to Worst The Greatest Chicago Bears of All Time 74.8k VOTES These are the greatest Bears of all-time. Since the NFL's inception, the Chicago Bears have been a vital part of the league'...
#16 of 89 The Greatest Defensive Tackles of All Time 52.8k VOTES The key to a winning football games is winning the battle in the trenches. For a defense, the unsung hero down fighting in t...
#106 of 508 The Greatest Defenders in NFL History 134.1k VOTES This list of the greatest defenders in NFL history is here to decide definitively who is the best defender in NFL history. T...
#8 of 12 12 Celebrities Who Happen To Be WWE Hall of Fame Members 123 VOTES You may be surprised to hear the celebrity wing of the WWE Hall of Fame features some seriously crazy names. Sure, Steve Aus...
#5 of 95 The Greatest Out of Shape Athletes in Sports 14.4k VOTES The greatest out-of-shape athletes don't fit the mold of the typical athlete with toned limbs and six-pack abs yet they cont...
#9 of 50 The Best NFL Players From South Carolina 967 VOTES Here’s a list of the best NFL players from South Carolina. The Palmetto state is home to many of the biggest names and ...
Famous People Named William and Bill 62k VIEWS List of famous people named Bill, along with photos. How many celebrities named William can you think of? The famous Bills b...
Famous People Whose Last Name Is Perry 14.6k VIEWS Being a fairly common name, it's no surprise there are a lot of famous people with the last name Perry. Do you recognize all...
Athletes Who Became Wrestlers 49.7k VIEWS Let's get ready to rumble! When excelling at one sport wasn't enough, these professional athletes became wrestlers. Several ...
26 Athletes Who Are Rappers 12.4k VIEWS You already know that these athletes can kick a ball, shoot a free throw, or score a goal, but did you know that they can al...

William Perry is also found on...