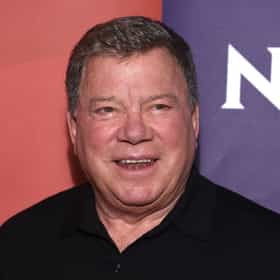 William Shatner (born March 22, 1931) is a Canadian actor, author, producer, director, and singer. In his seven decades of television, Shatner became a cultural icon for his portrayal of Captain James T. Kirk of the USS Enterprise in the Star Trek franchise. He has written a series of books chronicling his experiences playing Captain Kirk and being a part of Star Trek, and has co-written several novels set in the Star Trek universe. He has also written a series of science fiction novels called TekWar that were adapted for television. Shatner also played the eponymous veteran police sergeant in T.J. Hooker (1982–1986) and hosted the reality-based television series Rescue 911 ... more on Wikipedia

William Shatner is ranked on...

William Shatner is also found on...