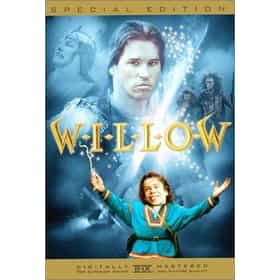 Willow is a 1988 American fantasy film directed by Ron Howard, produced and with a story by George Lucas, and starring Warwick Davis, Val Kilmer, Joanne Whalley, Jean Marsh, and Billy Barty. Davis plays the eponymous lead character and hero: a reluctant farmer who plays a critical role in protecting a special baby from a tyrannical queen in a sword and sorcery setting. Lucas conceived the idea for the film in 1972, approaching Howard to direct during the post-production phase of Cocoon in 1985. Bob Dolman was brought in to write the screenplay, coming up with seven drafts before finishing in late 1986. It was then set up at Metro-Goldwyn-Mayer and principal photography began in April ... more on Wikipedia

'Willow' Is A Watered-Down Version Of 'The Lord Of The Rings' 6.4k views The creator of one of the most epic space adventures of all time also gets to claim credit for one of the silliest sci-fi mo...

Willow is ranked on...

Willow is also found on...