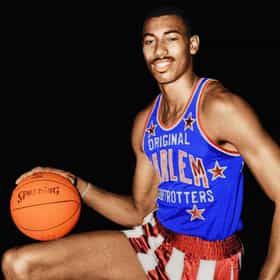 Wilton Norman Chamberlain (; August 21, 1936 – October 12, 1999) was an American basketball player who played as a center and is considered one of the greatest players in history. He played for the Philadelphia/San Francisco Warriors, the Philadelphia 76ers, and the Los Angeles Lakers of the National Basketball Association (NBA). He played for the University of Kansas and also for the Harlem Globetrotters before playing in the NBA. Chamberlain stood 7 ft 1 in (2.16 m) tall, and weighed 250 pounds (110 kg) as a rookie before bulking up to 275 and eventually to over 300 pounds (140 kg) with the Lakers. Chamberlain holds numerous NBA records in scoring, rebounding, and durability ... more on Wikipedia

18 Unbelievable But True Stories from the Buckwild Life of Wilt Chamberlain 69.7k views Wilt Chamberlain is, without a doubt, one of the greatest players that the NBA will ever see. He’s a literal and figurative ...

Wilt Chamberlain is ranked on...

Wilt Chamberlain is also found on...