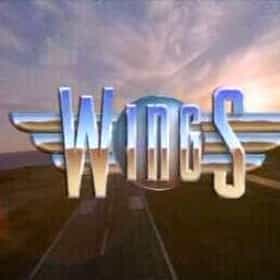 Wings is an American sitcom that ran on NBC from April 19, 1990, to May 21, 1997. Starring Tim Daly and Steven Weber as brothers Joe and Brian Hackett, the show is set at the fictional "Tom Nevers Field" airport, a small two-airline airport in Nantucket, Massachusetts, where the Hackett brothers operate Sandpiper Air. Exteriors of Nantucket Memorial Airport were used for the show. Interior scenes were filmed on Stage 19 at Paramount Studios in Hollywood, California, before a live studio audience. Other regulars include Crystal Bernard, David Schramm, Rebecca Schull, Thomas Haden Church, and Tony Shalhoub. Farrah Forke later joined the cast for two seasons. When Forke left, ... more on Wikipedia

The Best Wings Episodes 619 votes List of the best Wings episodes, as voted on by other fans of the series. Wings is a sitcom created by the team of Cheers, t...

Wings is ranked on...

#276 of 2,297 The Greatest TV Shows Of All Time 1.5M VOTES Choosing the best TV shows of all time means taking into account the best TV dramas, the best TV comedies, the best cartoons...
#92 of 158 Shows with the Best Freakin' Series Finales of All Time 264.6k VOTES This list of the best series finales in television is a somber reminder that no matter how much you love a TV character or a...
#24 of 58 The Greatest Sitcoms of the 1990s, Ranked 107.9k VOTES It’s hard to choose the best sitcoms of the ‘90s: so many quality theme songs, so many outlandish misunderstandings, and so ...
#87 of 204 The Most Important TV Sitcoms 82.5k VOTES These sitcoms are important because they either influenced a generation's culture or because they permanently influenced the...
#196 of 422 The Best TV Shows to Rewatch 133.5k VOTES List of the best TV shows to rewatch, as ranked by television fans and critics. When the weekend comes around and you can’t ...
#37 of 686 The Greatest Shows of the 1990s, Ranked 262.9k VOTES In the 1990s, television was one of the fastest growing mediums. More TV shows were popping up than ever before, and ratings...
#48 of 111 The Best NBC TV Shows of All Time 37k VOTES List of popular NBC shows, ranked from best to worst. This list of the best NBC TV shows, which includes both current and ca...
#14 of 17 The Best NBC Comedies of the 1990s 10.3k VOTES The 90s were a great time for NBC TV shows. It was truly "must see TV." These are the best 1990s NBC comedy shows,...

Wings is also found on...