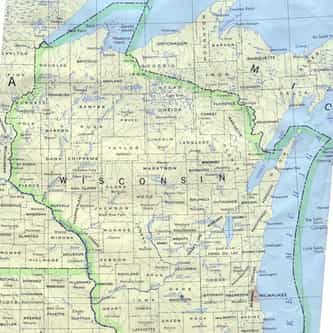 Wisconsin is a U.S. state located in the north-central United States, in the Midwest and Great Lakes regions. It is bordered by Minnesota to the west, Iowa to the southwest, Illinois to the south, Lake Michigan to the east, Michigan to the northeast, and Lake Superior to the north. Wisconsin is the 23rd state by total area and the 20th most populous. The state capital is Madison, and its largest city is Milwaukee, which is located on the western shore of Lake Michigan. The state comprises ... more on Wikipedia

32.4k readers 12 Horrifying Tales And Legends That Prove Wisconsin Is A Creepy Place

Wisconsin IS LISTED ON

#37 of 50
37.6k VOTES People Are Giving Their States 'Honest' Mottos And The Answers Are Hilarious
#41 of 51
51.6k VOTES The Worst Places to Live in The U.S.
#28 of 50
862 VOTES The Most Haunted Places In Each State
#5 of 50
27.4k VOTES People Are Naming The Meal That Best Represents Their State And The Answers Are Surprising
#23 of 50
8.7k VOTES The Best State Nicknames
22.6k VIEWS People Are Describing The Worst Things About Their State
27.4k VIEWS Common Slang Terms & Phrases From Every State
8.1k VIEWS People Are Describing Their States Like People In A Bar - And The Descriptions Are Pretty Spot On
662.9k VIEWS 50 Bizarre State Laws
10.2k VIEWS How Much Your Rent Would Cost In 1970 In Every US State
#14 of 34
2.3k VOTES The Best U.S. States for Camping
#7 of 31
6.9k VOTES The Best US States for Fishing
6.9k VIEWS How Much Alcohol People Drink In Every State
3.9k VIEWS We Know Where You Want to Travel This Summer, Based on What State You Live In
106.3k VIEWS All the US States Where Gay Marriage Is Legal
10.4k VIEWS The Best State Songs
Highest U.S. Teenage Birthrates by State