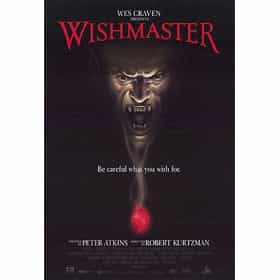 Wishmaster is a 1997 American horror film directed by Robert Kurtzman. It was executive produced by Wes Craven, the only film of the Wishmaster series with his name attached. The plot of Wishmaster concerns a djinn, an omnipotent, supremely evil entity who is released from a jewel and seeks to capture the soul of the woman who discovered him, thereby opening a portal and freeing his fellow djinn to inhabit the earth. The film stars Andrew Divoff and Tammy Lauren, and features many actors from other popular horror movies such as A Nightmare on Elm Street, Friday the 13th and Candyman. Three sequels were released: Wishmaster 2: Evil Never Dies, Wishmaster 3: Beyond the Gates of Hell and ... more on Wikipedia

Wishmaster is ranked on...

Wishmaster is also found on...