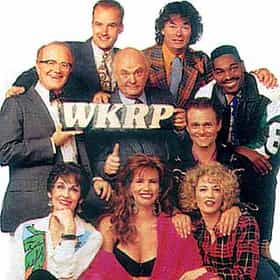 WKRP in Cincinnati is an American situation comedy television series that features the misadventures of the staff of a struggling fictional radio station in Cincinnati, Ohio. The show was created by Hugh Wilson and was based upon his experiences working in advertising sales at Top 40 radio station WQXI in Atlanta. Many of the characters and even some of the stories are based on people and events at WQXI. The ensemble cast consists of Gary Sandy, Howard Hesseman, Gordon Jump, Loni Anderson, Tim Reid, Jan Smithers, Richard Sanders and Frank Bonner. Like many other MTM productions, the humor came more from running gags based on the known predilections and quirks of each character, rather ... more on Wikipedia

WKRP in Cincinnati is ranked on...