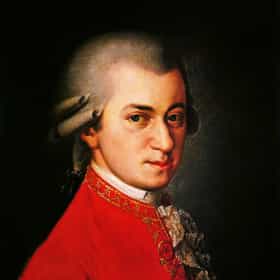 Wolfgang Amadeus Mozart (27 January 1756 – 5 December 1791), baptised as Johannes Chrysostomus Wolfgangus Theophilus Mozart, was a prolific and influential composer of the classical era. Born in Salzburg, Mozart showed prodigious ability from his earliest childhood. Already competent on keyboard and violin, he composed from the age of five and performed before European royalty. At 17, Mozart was engaged as a musician at the Salzburg court but grew restless and travelled in search of a better position. While visiting Vienna in 1781, he was dismissed from his Salzburg position. He chose to stay in the capital, where he achieved fame but little financial security. During his final years ... more on Wikipedia

17 Bizarre, Mind-Blowing Facts and Stories About Mozart 108.7k views Genius and insanity often go hand-in-hand, so it should come as no surprise Mozart, the paramount musical genius of the west...

Wolfgang Amadeus Mozart is ranked on...