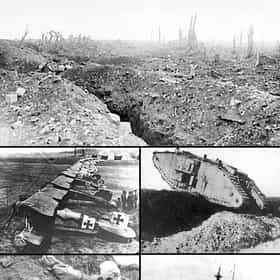 World War I, also known as the First World War or the Great War, was a global war mostly centered in Europe that began on 28 July 1914 and lasted until 11 November 1918. More than 9 million combatants and 7 million civilians died as a result of the war, a casualty rate exacerbated by the belligerents' technological and industrial sophistication, and tactical stalemate. It was one of the deadliest conflicts in history, paving the way for major political changes, including revolutions in many of the nations involved. The war drew in all the world's economic great powers, which were assembled in two opposing alliances: the Allies and the Central Powers of Germany and Austria-Hungary. ... more on Wikipedia

lists about World War I

World War I is ranked on...

8 Ridiculous Conspiracy Theories That Blame Satanists For Almost Everything 13.4k VIEWS Conspiracy theories, specifically Satanic conspiracy theories, provide a new context for many world events that feel too lar...
List of American Wars 32.2k VIEWS A list of wars or military conflicts involving the United States, beginning with the American Revolution of 1774. Significan...

World War I is also found on...

The Battles of Erich Ludendorff