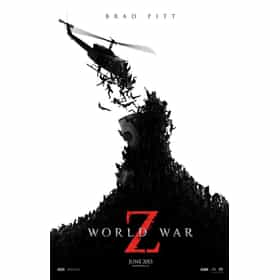 This film is a 2013 American apocalyptic action horror film directed by Marc Forster. The screenplay by Matthew Michael Carnahan, Drew Goddard, and Damon Lindelof is from a screen story by Carnahan and J. Michael Straczynski, based on the 2006 novel of the same name by Max Brooks. The film stars Brad Pitt as Gerry Lane, a former United Nations investigator who must travel the world to find a way to stop a zombie pandemic. Pitt's Plan B Entertainment secured the film rights in 2007, and Forster was approached to direct. ... more on Wikipedia

The 21 Behind-The-Scenes Disasters That Ruined World War Z 18.2k views World War Z production problems are the stuff of legend. How did filming get so weird and so messed up so fast, though? An a...
World War Z Movie Quotes 119 votes "World War Z" movie quotes provide the dialogue in the highly anticipated action-apocalypse movie based on the boo...

World War Z is ranked on...