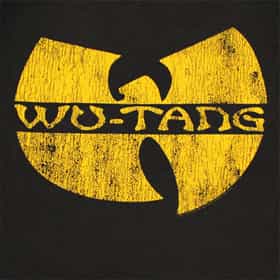 Wu-Tang Clan is an American hip hop group formed in the New York City borough of Staten Island in 1992, originally composed of rapper-producer RZA and rappers GZA, Ol' Dirty Bastard, Method Man, Raekwon, Ghostface Killah, Inspectah Deck, U-God and Masta Killa. An important act in the East Coast and hardcore hip hop styles, Wu-Tang Clan are regarded as one of the most influential hip hop groups of all time. Their 1993 debut album, Enter the Wu-Tang (36 Chambers), is considered one of the greatest hip hop albums of all time.Wu-Tang Clan has released four gold and platinum studio albums. The group has introduced and launched the careers of a number of affiliated artists and groups, ... more on Wikipedia

Wu-Tang Clan is ranked on...

#510 of 2,175 The Greatest Musical Artists of All Time 13.4M VOTES When VH1 polled fellow artists to name the greatest artists of all time, it seemed like a good idea---but in reality, the li...
#75 of 409 People who voted for Wu-Tang Clan... People under 30 are 2x more likely to vote for this The Greatest Musical Artists of the '90s 1M VOTES   Take a big whiff- "mmmbop", it smells like the '90s in here! An incredibly eclectic decade for music, the...
#8 of 138 The Dopest Rappers of the '90s 241.7k VOTES The best '90s rappers and rap groups brought us some of the best rap songs of all time with artists like Tupac Shakur, Dr. D...
#19 of 98 The Rappers with the Dirtiest Rhymes 44.4k VOTES The rappers with the dirtiest rhymes are renowned for spitting some of the most inappropriate, pornographic and dirty lyrics...
#5 of 231 The Best New York Rappers 66.1k VOTES It probably goes without saying, but New York City is undeniably the birthplace of rap. Its impact is still very much alive ...
#33 of 63 Rappers with the Best Rhymes, Ranked 11.9k VOTES When ranking the best rap artists, how a rapper rhymes is an important factor in determining which hip hop artists stan...
#23 of 69 The Best Stoner Music 8.8k VOTES Whenever people sit back, light a fat one and want to chill on their couch, it's likely that they'll want throw on a great a...
#9 of 44 The Best Rappers On NPR's Tiny Desk Concerts, Ranked 427 VOTES NPR Music Tiny Desk Concerts have featured some of the greatest contemporary musicians and musical artists. This l...
#1 of 19 The Best Hip Hop Logos Of All Time 11.7k VOTES Picking the best hip hop and rap logos of all time was not nearly as hard as choosing the best rock band logos ever, but it ...
#98 of 139 The Best Musical Guests on 'The Tonight Show Starring Jimmy Fallon' in 2019 1.6k VOTES Update - Check out the musical guests on Fallon in 2020! This list contains all the 2019 musical guests on Jimmy Fallon. R...
#7 of 194 The Best Old School Hip Hop Groups/Rappers 155.7k VOTES If you're a fan of rap music, you should have at minimum a base knowledge in old school rap. If not for old school rappers, ...
#8 of 86 The Greatest Gangsta Rappers of All Time 110.1k VOTES If you were a fan of West Coast rap at the end of the 1980s and early 1990s, the odds are pretty high that you're familiar w...
#1 of 15 The Best Hip Hop Groups Of 2019, Ranked 3.2k VOTES Updated: check out our list of the best rap groups of 2020! No solo artists allowed - these are the best rap groups of 201...
Rappers Who Have Their Own Clothing Lines 16.8k VIEWS Many celebrities launch their own clothing companies, so it is unsurprising there are so many rappers with clothin...

Wu-Tang Clan is also found on...