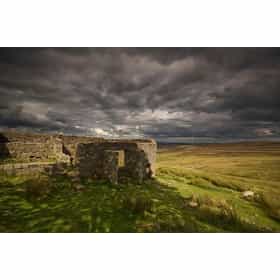 Wuthering Heights is a 1939 American black-and-white film directed by William Wyler and produced by Samuel Goldwyn. It is based on the novel, Wuthering Heights by Emily Brontë. The film depicts only sixteen of the novel's thirty-four chapters, eliminating the second generation of characters. The novel was adapted for the screen by Charles MacArthur, Ben Hecht and John Huston. The film won the 1939 New York Film Critics Award for Best Film. It earned nominations for eight Academy Awards, including for Best Picture and Best Actor. The 1939 Academy Award for Best Cinematography, black-and-white category, was awarded to Gregg Toland for his work. In 2007, Wuthering Heights was ... more on Wikipedia

Wuthering Heights is ranked on...

#387 of 410 The Best Rainy Day Movies 175.8k VOTES For many, rainy days are no fun—but it doesn't have to be that way. A great way to spend such days is watching movies, ...
#39 of 77 The Best Period Romance Movies 8k VOTES There's just something swoon-worthy about period pieces. Maybe it's the star-crossed love in these stories that wins over ...
#68 of 106 The Best Valentine's Day Movies 5.2k VOTES The absolute best movies for Valentine’s Day, ranked from the most popular to the least based on the amount of votes cast fo...
#12 of 75 The Greatest Classic Romance Movies 6.4k VOTES Who wouldn't swoon over a romantic tale of two people coming together against all odds to fall in love? These classic r...
#4 of 23 Great Period Movies Set in the 19th Century 1k VOTES The 19th century often seems like the distant past, but the classic stories found in 1800s period films prove to be timele...
#60 of 158 The Best Costume Drama Movies 2.8k VOTES A list of the best costume drama movies ever made, ranked by film fans' votes -- many of which are streaming on Netflix or A...
#5 of 244 The Best Movies of 1939 5k VOTES List of the best movies of 1939, with movie trailers when available. These top movies of 1939 are listed by popularity, so t...
#3 of 62 The Best Laurence Olivier Movies 2.2k VOTES List of the best Laurence Olivier movies, ranked best to worst with movie trailers when available. Laurence Olivier's highes...
AFI's Top 100 Love Story Movies 18.7k VIEWS AFI's list of the best love story films of all-time. This romance movies list is sure to sweep you off your feet.

Wuthering Heights is also found on...