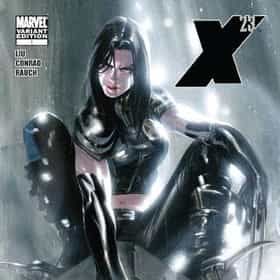 X-23 is a fictional character, a superheroine appearing in comic books published by Marvel Comics, most commonly in association with the X-Men. She was originally created by Craig Kyle for the X-Men: Evolution animated series before debuting in the NYX comic series in 2004. Since then she has notably had two six-issue miniseries written by Craig Kyle and Christopher Yost, regular runs in New X-Men, X-Force, Avengers Academy, and her own self-titled twenty-one issue comic series written by Marjorie Liu. X-23 is a female clone of Wolverine. Like Wolverine, X-23 has a regenerative healing factor, superhuman strength, senses, speed, agility, and reflexes. She also has retractable ... more on Wikipedia

#24 of 638 People who voted for X-23... also upvote Wolverine on The Best Comic Book Superheroes of All Time also upvote Deadpool on The Best Comic Book Superheroes of All Time The Best Female Comic Book Characters 286.1k VOTES List of the best female comic book characters, be they superhero or villain. These are the women characters comic book enthu...
#76 of 311 People who voted for X-23... also upvote James Bond Franchise on Every James Bond Movie, Ranked Best to Worst The Best Comic Book Superheroes of All Time 1.8M VOTES List of the most badass, tough, and iconic comic book superheroes ever created. This list includes central characters from b...
#21 of 69 The Best X-Men Characters of All Time 93.5k VOTES   Comics legends Stan Lee and Jack Kirby brought the X-Men to life in X-Men #1 back in 1963. The X-Men...
#13 of 55 The Best Teenage Superheroes 65.7k VOTES This list of teenage superheroes has been voted on by you. the fans. The are the best teenage superheroes of all time! Being...
#70 of 105 Comic Book Characters We Want to See on Film 134.5k VOTES   Certain comic book characters definitely lend themselves to film better than others. Sometimes it's their costume...
#17 of 30 The Most Stunning Female Marvel Superheroes 22.4k VOTES Here is a list of Marvel's superheroine bombshells ranked by the fans. There's just something impossibly beautiful abou...
#1 of 16 Marvel Superheroes With The Most Harrowing Origin Stories 1.9k VOTES The adventures of comic book superheroes are our modern mythology - fantastical sagas filled with moral lessons that ar...
#1 of 17 Comic Book Characters That Debuted Outside Comics 5.9k VOTES Comic book characters make the transition from their respective panels to a screen near you all the time! But did you know t...
#2 of 12 The Best Gender-Swapped Versions Of Your Favorite Superheroes 2k VOTES Women in comics have been a staple since the beginning, but they've often taken a back seat to their male counterparts. Comi...
#15 of 37 The Best Anti-Heroes in Comics 206.7k VOTES An anti-hero is defined as a leading character in a story who lacks traditional heroic qualities such as idealism, courage, ...
#4 of 40 The Best Comic Book Characters With Black Hair 2.3k VOTES The greatest superheroes and supervillains with black hair, ranked by comic book fans everywhere. To be fair, a massive cont...
#8 of 15 Ranking Every Spider-Woman (and Spider-Girl) in the Comics 2.6k VOTES We’re ranking every Spider-Woman and Spider-Girl in the Marvel comics universe. Along with all Spider-Woman incarnation...
#2 of 14 Ranking Every Wolverine in the Comics 648 VOTES Hey, bub, we’re ranking every Wolverine in the Marvel comics universe. Along with all Wolverine incarnations that appea...
10 Gender Swapped Comic Book Characters 17.5k VIEWS Marvel shook the internet when they announced that the next iteration of Thor will be a woman. Though this news is definitel...
List of All A-Force Members 458 VIEWS Here is the full roster of the Marvel Comics superhero team, the A-Force. Created by writers G. Willow Wilson and Margu...