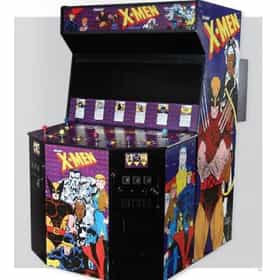 X-Men is an arcade game produced by Konami in 1992. It is a side-scrolling beat 'em up based on the Marvel Comics characters of the same name. The character designs of the X-Men and the supervillains in the game are based on the 1989 X-Men pilot episode X-Men: Pryde of the X-Men. In the game, players control one of the six playable X-Men to defeat their enemy Magneto. Konami made a six-player version of the game utilizing two screens housed in a deluxe cabinet. An HD port of the game by Backbone Entertainment was released by Konami on PlayStation Network and Xbox Live Arcade on December 14, 2010 and December 15, 2010 respectively, followed by mobile versions for iOS and Android ... more on Wikipedia

#95 of 183 The Greatest Fighting Games Ever Made 82.8k VOTES The best fighting games pit player against player testing reflexes and skill. Fighting games range from the 3D arena fighter...
#64 of 133 The Best Classic Arcade Games 91k VOTES The best classic arcade games include not only the big, big, BEEG cabinet coin-op arcade games from the crazy 80s, but also ...
#15 of 158 People who voted for X-Men... also upvote X-Men Franchise on The Greatest Comic Book Movies of All Time also upvote X-Men Franchise on The Best Marvel Comics Movies The Best Comic Book Based Video Games 20.5k VOTES Video games are about the closest you can get to becoming someone else, you know, without all the surgery and name changing ...
#27 of 61 The Best Wolverine Versions Of All Time 9.6k VOTES Wolverine is arguably the most recognizable and prolific of all the X-Men. He's the best there is at what he does. As s...
#4 of 17 The Coolest Arcade Game Cabinet Art Ever! 1.7k VOTES Even now, when we step into an arcade, with its seizure inducing lights and carpet that looks like it’s from an alternate fu...
#14 of 54 The Best Versions of X-Men 3.3k VOTES The X-Men are easily one of the most iconic and recognizable superhero teams in the world. There are dozens of formats the c...
#1 of 14 People who voted for X-Men... are 9x more likely to vote for The Simpsons Arcade Game on this list The Greatest Games You Could Actually Beat at an Arcade 2k VOTES Back in the heyday of video game arcades, it seemed like arcade games were just too hard to beat. In fact, many were built t...
#143 of 205 The Best Game Gear Games 1.5k VOTES List of the best Game Gear games ever produced for the Sega Game Gear system. The Game Gear console was one of the most popu...
#52 of 302 The Best Sega Genesis Games of All Time 47.9k VOTES List of the Best Games for the Sega Genesis. These are not all the games, but they are the best as voted on by gamers. Sega ...
#5 of 59 The Best '90s Arcade Games 34.2k VOTES Though arcades are a bit harder to find nowadays, true gamers (and 90s kids) will never forget the great 90s arcade games th...
#5 of 106 The Best Beat 'em Up Games of All Time 14.8k VOTES This is a list of the best beat 'em up games of all time for any console or system, including cover art pictures when availa...
#16 of 120 The Best Marvel Games Ever, Ranked 8.1k VOTES If you're a fan of the comic books or the MCU, then you'll enjoy the best Marvel video games ever made. Featuring classic&nb...
#19 of 81 The Best Konami Games List 4.6k VOTES List of the best Konami games with images, including any well-known Konami made games for any platform and console. This lis...
#3 of 43 The Best X-Men Video Games of All Time 503 VOTES There have been so many X-Men video games that figuring out the all-time best X-Men games is no simple task. With this list,...
#78 of 100 The Best Xbox 360 Action Games 658 VOTES If you owned a Xbox 360 at any time during your life, then it's safe to say there were probably a few action games in your c...