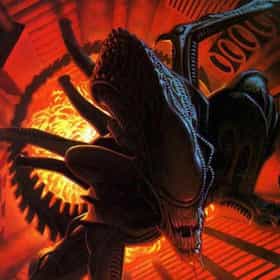 The "Alien" is a fictional endoparasitoid extraterrestrial species that is the eponymous antagonist of the Alien film series. The species made its debut in the film Alien, and reappeared in the sequels Aliens, Alien 3, and Alien: Resurrection, as well as the crossover franchise Alien vs. Predator and Aliens vs. Predator: Requiem. A similar creature of a slightly different design also briefly appears in the Ridley Scott film Prometheus. In addition, the Alien appears in various literature and video game spin-offs from the franchises. Unlike many other enemy extraterrestrial races in science fiction, the Aliens do not have a technological civilization, but are predatory ... more on Wikipedia

Xenomorph is ranked on...

#23 of 961 People who voted for Xenomorph... also upvote The Terminator Franchise on The Best Movies of All Time also upvote Alien Franchise on The Best Movies of All Time The Greatest Movie Villains of All Time 1.2M VOTES While some of us tend to despise movie villains, plenty of movie-goers favor some of these antagonists. Whether that's ...
#1 of 62 The Fictional Monsters You'd Least Like to Have After You 43.1k VOTES List of the fictional monsters you’d least like to have after you. Big or small, slimy or humanoid, these are the monsters t...
#1 of 136 The Most Awesome Monsters & Creatures of All Time 100.7k VOTES This list of the greatest monsters and creatures of all time ranks the scary, the sly, the freaky, the brutal and the danger...
#175 of 258 The Most Hardcore Video Game Heroes of All Time 297.2k VOTES Who are the toughest and greatest video game characters ever? Not all videogame player characters are necessarily heroic, bu...
#3 of 14 The Greatest Movie Villains From The '70s 456 VOTES Close the curtains and lock the doors as we rank the greatest horror villains of the ‘70s. The 1970s was an interesting time...
#16 of 24 The Greatest '90s Horror Villains 731 VOTES The 1990s were an interesting time for horror films.  It was a time when most of our beloved horror icons were starting...
#7 of 25 The Greatest '80s Horror Villains 649 VOTES Lock the door, grab a friend, and turn on all the lights as we rank the best 80s horror villains. The 1980s saw a surge of h...

Xenomorph is also found on...