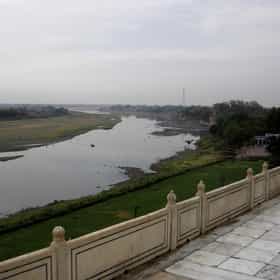 The Yamuna, sometimes called Jamuna, is the largest tributary river of the Ganges, in northern India. Originating from the Yamunotri Glacier at a height of 6,387 metres on the south western slopes of Banderpooch peaks in the uppermost region of the Lower Himalayas in Uttarakhand, it travels a total length of 1,376 kilometers and has a drainage system of 366,223 square kilometres, 40.2% of the entire Ganges Basin, before merging with the Ganges at Triveni Sangam, Allahabad, the site for the Kumbha Mela every twelve years . It crosses several states, Uttarakhand, Haryana and Uttar Pradesh, passing by Uttarakhand and later Delhi, and meets its tributaries on the way, including Tons, its ... more on Wikipedia

Yamuna is ranked on...

#24 of 57 The Top Must-See Attractions in India 2.5k VOTES List of top things to do in India. What are the best things to see in India? This list ranks the most popular tourist attrac...