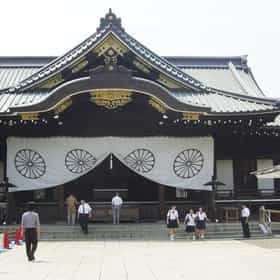 Yasukuni Shrine is a Shinto shrine in Chiyoda, Tokyo, Japan. It was founded by Emperor Meiji and commemorates anyone who had died in service of the Empire of Japan, which existed from the Meiji Restoration of 1868 until the nation was renamed during the Allied occupation in 1947. The shrine's purpose has been expanded over the years to include those who died in the wars involving Japan spanning from the entire Meiji and Taishō period, and lesser part of the Shōwa period. The shrine now lists the names, origins, birthdates, and places of death of 2,466,532 men, women and children, including 1,068 war criminals; 14 of whom are considered A-Class, leading to controversies. The Honden ... more on Wikipedia

Yasukuni Shrine is ranked on...