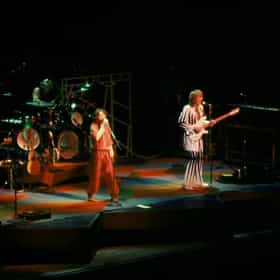 #348 of 358 The Worst Rock Bands of All Time 752.1k VOTES Here they are: the absolute worst rock bands in history, ranked from the most awful bands to the kind of okay but still pret...
#99 of 502 The Greatest Musical Artists of the '80s 576.7k VOTES   The greatest and most prolific artists of music's most colorful decade are remembered on this list. This list is ba...
#35 of 133 Bands Or Artists With Five Great Albums 27.8k VOTES Building a successful band is tough but keeping it going is much tougher. Even some of history's biggest, best-selling ...
#87 of 277 Rank the Rock N Roll Hall of Fame Inductees 312k VOTES Update: Follow Ranker's official New Rock 2020 playlist on Spotify! A complete list of bands and artists inducte...
#37 of 620 The Greatest Live Bands of All Time 333.8k VOTES List of the greatest live bands or artists of all time, created and ranked by music fans worldwide asks the question "w...
#20 of 76 The Greatest Rock Band Logos of All Time 52.3k VOTES Picking the best band logos of all time turned out to be quite a task. When asking people about their favorite band logos, m...
#52 of 70 The Best Stoner Music 8.8k VOTES Whenever people sit back, light a fat one and want to chill on their couch, it's likely that they'll want throw on a great a...
#80 of 100 Artists Who Have Inspired the Best Covers 16.5k VOTES Artists who have inspired the best covers include legendary musicians and bands like The Beatles, Bob Dylan and Jimi Hendrix...
#2 of 318 The Best Progressive Rock Bands/Artists 164.9k VOTES Loved by many and hated by some, progressive rock - or prog rock - is one of the most popular subgenres of rock music. Meldi...
#3 of 114 The Best Art Rock Bands & Artists of All Time 70.2k VOTES Fusing influences ranging as far as experimental rock and classical music, art rock is a form of music where the best musici...
#28 of 172 The Best Electronic Rock Bands/Artists 24.3k VOTES This electronic rock bands list ranks the best electronic rock artists and musicians by votes. This list of electronic ban...
#3 of 78 The Best Synth Rock Bands/Artists 3.5k VOTES Synth rock, also known to many as electro rock and electronic rock, is one of the most popular genres of rock to emerge in t...
#1 of 91 The Best Symphonic Rock Bands 33.2k VOTES Symphonic rock is often times confused with progressive rock and with good reasons. Many of the best symphonic rock overlap ...