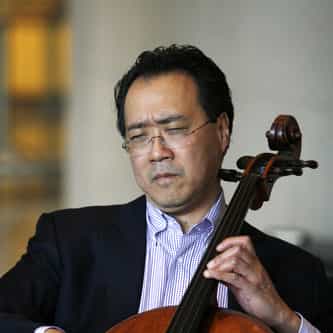 Yo-Yo Ma (born October 7, 1955) is a Chinese-American cellist. Born in Paris, he spent his schooling years in New York City and was a child prodigy, performing from the age of four and a half. He graduated from the Juilliard School and Harvard University, and has performed as a soloist with orchestras around the world. He has recorded more than 90 albums and received 18 Grammy Awards. In addition to recordings of the standard classical repertoire, he has recorded a wide variety of folk ... more on Wikipedia

Yo-Yo Ma IS LISTED ON

recent famous deaths, green lantern comic, colour of snake, cheers tv show, adult swim shows, shia labeouf girlfriend, gary indiana basketball, what does it mean to sell out, what is it like to be famous, get real movie