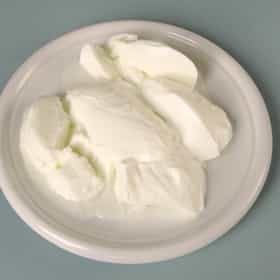 Yogurt, yoghurt, or yoghourt is a food produced by bacterial fermentation of milk. The bacteria used to make yogurt are known as "yogurt cultures". Fermentation of lactose by these bacteria produces lactic acid, which acts on milk protein to give yogurt its texture and its characteristic tang. Worldwide, cow's milk, the protein of which is mainly casein, is most commonly used to make yogurt. Milk from water buffalo, goats, ewes, mares, camels, and yaks however, is also used to produce yogurt in various parts of the world. Dairy yogurt is produced using a culture of Lactobacillus delbrueckii subsp. bulgaricus and Streptococcus thermophilus bacteria. In addition, other ... more on Wikipedia

Yogurt is ranked on...

#49 of 282 The Very Best Snacks to Eat Between Meals, Ranked 101.5k VOTES The best snacks in the world including the best salty snacks, the best sweet snacks, and the guiltiest indulgences, many of ...
#89 of 103 The Best Things To See At A Buffet 14.4k VOTES A buffet offers freedom to choose - and often the freedom of piling your plate as high as you like - but what foods are are ...
#13 of 16 Famous Foods Discovered by Accident 11k VOTES What makes a food so tasty? You might say, a skillful chef, high-quality materials, and recipes passed down and improved upo...
#23 of 40 The Best Foods for Nausea 1.9k VOTES List of the best food for nausea, as ranked by health care professionals and Ranker users. Nausea is an uncomfortable feelin...
#15 of 43 The Best Energy Foods 1k VOTES List of the best energy foods, as ranked by nutritionists, health care professionals, and real people like you. When you fac...
#31 of 39 The Best Foods for Blood Pressure 354 VOTES List of the best foods for blood pressure maintenance, as ranked by health care professionals and normal people. High blood ...
#6 of 41 The Best Foods for Clear Skin 723 VOTES Diet has a lot to do with your skin type. If you have oily, acne-prone skin, it could be due to the sort of foods you eat, i...
#11 of 43 The Best Anti-Inflammatory Foods 534 VOTES List of the best anti-inflammatory foods. Many diets focus on losing weight and looking better, but no diet is more concerne...
#29 of 41 The Best Gelato Flavors 3.8k VOTES Your mouth has been watering just thinking about it; you approach the ice cream café, anxiously awaiting the creamy, ...