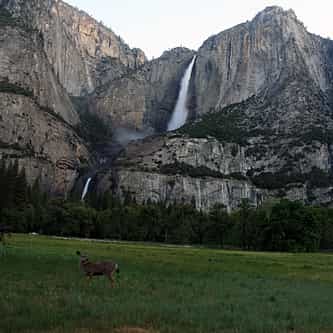 Yosemite Falls is the highest waterfall in North America. Located in Yosemite National Park in the Sierra Nevada of California, it is a major attraction in the park, especially in late spring when the water flow is at its peak. The total 2,425 feet from the top of the upper fall to the base of the lower fall qualifies Yosemite Falls as the sixth highest waterfall in the world, though with the recent discovery of Gocta Cataracts, it appears on some lists as seventh. ... more on Wikipedia

Yosemite Falls IS LISTED ON