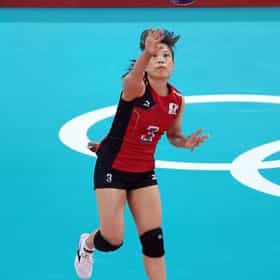 Yoshie Takeshita (竹下 佳江 Takeshita Yoshie, born March 18, 1978) is a Japanese volleyball player who played for JT Marvelous. She is currently Head Coach of Japanese volleyball team Victorina Himeji.She played for the All-Japan women's volleyball team and was a participant at the 2004 Summer Olympics, 2008 Summer Olympics and 2012 Olympics. At the 2012 Olympics, she was part of the Japanese team that won the bronze medal. She was also part of the 2010 Japanese Women's team that won bronze at the world championships, beating the US in the bronze medal match.Her nickname is World's smallest and strongest setter (世界 最小 最強 セッター Sekai saisho saikyo setter). She was the captain of the Japanese ... more on Wikipedia

Yoshie Takeshita is also found on...