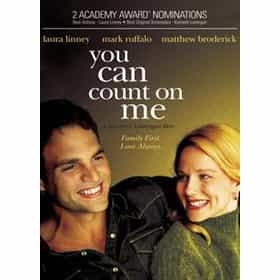 You Can Count on Me

You Can Count on Me is a 2000 American drama film starring Laura Linney, Mark Ruffalo, Rory Culkin, and Matthew Broderick. Written and directed by Kenneth Lonergan, it tells the story of Sammy, a single mother living in a small town, and her complicated relationships with family and friends. The story takes place in the fictionalized Catskill communities of Scottsville and Auburn, New York. The film was primarily shot in and around Margaretville, New York. The film and Linney's performance received numerous positive reviews among critics, and dozens of award nominations and awards at film festivals and during the awards season, including two Oscar nominations. ... more on Wikipedia

You Can Count on Me is ranked on...

You Can Count on Me is also found on...