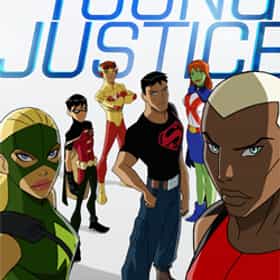 Young Justice is an American animated television series created by Brandon Vietti and Greg Weisman for Cartoon Network. Despite its title, it is not a direct adaptation of Peter David, Todd Dezago and Todd Nauck's Young Justice comic series, but rather an adaptation of the entire DC Universe with a focus on young superheroes. The series follows the lives of teenaged heroes and sidekicks who are members of a fictional covert operation group called The Team. The Team is essentially a young counterpart to the famous adult team, the Justice League. The main setting is the fictional universe previously designated Earth-16, during a time period in which superheroes are a relatively recent ... more on Wikipedia

12 'Young Justice' Fan Theories 600 votes Contains major spoilers for Season 1 and 2 of Young Justice. After a long hiatus, the beloved DC animated series Young Ju...
12 Reasons Why 'Young Justice' Is Better Than 'Teen Titans' 2.2k views While Marvel dominated the film world in the 2010s, DC remained king of the animated television serial - a title they first ...
The Best Young Justice Episodes 2.2k votes List of the best Young Justice episodes, as voted on by other fans of the series. Created for the Cartoon Network, Young Jus...
The Best Members of Young Justice 4.9k votes Created by writer Todd DeZago and artist Todd Nauck, these 16 characters made up all members of the Young Justice superhero ...

Young Justice is ranked on...