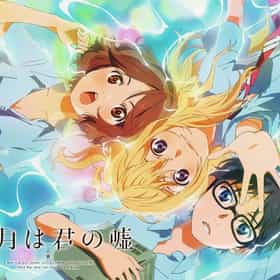 Your Lie in April

Your Lie in April, known in Japan as Shigatsu wa Kimi no Uso or just simply Kimiuso, is a Japanese manga series written and illustrated by Naoshi Arakawa. Piano prodigy Kōsei Arima dominated various music competitions and has become famous among child musicians, but also controversial. After the death of his abusive mother, who was also his coldhearted instructor who forced him to play the piano emotionlessly, he had a mental breakdown at the age of eleven while performing at a piano recital which resulted in him no longer being able to hear the sound of his piano even though his hearing was perfectly fine. ... more on Wikipedia

lists about Your Lie in April

Your Lie in April is ranked on...

#14 of 79 The 30+ Best Anime for Teens 86.9k VOTES You might think that all anime is good for teens to watch, but there are some very sexual and violent series out there that ...
#33 of 80 25+ Anime With Great Rewatch Value 87.1k VOTES Let's face it – sometimes you just don't feel like bothering with new anime. While new experiences can be rewarding, so...
#23 of 120 The Best Anime on Crunchyroll 616.8k VOTES It's the premiere anime streaming service, but what are the best anime shows on Crunchyroll? Sure you can watch on Netf...
#15 of 113 The Best Anime Streaming on Netflix 402.9k VOTES This is a list of the best anime on Netflix, voted on by over 70,000 anime fans like you and updated monthly. For new a...
#1 of 206 The Saddest Anime Series of All Time 469.7k VOTES Are you looking for sad anime that will make you cry? Well look no further, because for this list we're ranking the saddest ...
#2 of 15 The 15 Most Depressing Anime Endings That Left You Dead Inside 5.8k VOTES Whether you love a good cry or hate being blind-sided with unexpectedly depressing anime endings, you've probably encountere...
#46 of 105 The Best Shoujo Anime And Manga 68.8k VOTES For this poll we're ranking the best shoujo anime and manga, with the help of your votes. The shoujo demographic is aimed to...
#3 of 15 The 15 Saddest Anime Scenes Of All Time 16.9k VOTES There's nothing like a sad scene to make you emotionally invested in an anime. These emotional moments may also compel ...
#1 of 14 The 14 Most Tragic Romance Anime 15.1k VOTES Anime is one of the best artistic mediums for romance stories. Between the dramatic storytelling, beautiful art, themat...
#3 of 22 Anime With The Most Gorgeous Train Station Scenes 577 VOTES Whether on another planet or just in another country, decades in the past or far into the future, beautiful anime train...
#1 of 17 17 Anime Series That Will Make You Cry Like a Baby 58k VOTES While a lot of anime stays pretty lighthearted, most viewers know that it isn't always fun and games. There are many depress...
#10 of 20 20 Bucket List Anime You Must See Before You Die 142.7k VOTES Thousands of anime series exist out there, and more new ones debut every season. With so much available, it can be...
#13 of 29 The Best Anime Like Kids on the Slope 148 VOTES Looking for more anime like Kids on the Slope? Moving around can be pretty difficult if you're just a regular kid trying to ...
#1 of 15 15 Anime With Bittersweet Endings 8k VOTES While they may break your heart, there's no denying the everlasting impact that anime with bittersweet endings have on you. ...
#1 of 36 The Best Music Anime of All Time 12.8k VOTES Tari Tari, Kids on the Slope, & Beck: Mongolian Chop Squad. If you've seen these shows, you know they have one thing...
#3 of 13 13 Live Action Anime Movies That Are Actually Worth Watching 5.5k VOTES Live action anime movies have a reputation for being terrible. This reputation is not unearned - anyone who has seen or even...
#18 of 111 The Best English-Dubbed Anime on Netflix 17.9k VOTES Need to know which anime on Netflix are dubbed in English? Luckily for you, we've got a list of every dubbed anime currently...
#10 of 24 The Best Anime Like Nana 781 VOTES Need some Nana anime recommendations? Since it's such an influential series, let's rank the best anime like N...
#2 of 41 The Best Drama Anime on Netflix 4.1k VOTES If you're looking for some good drama anime on Netflix, we've got you covered! This list will tell you what drama anime...
#4 of 13 The 13 Best Anime Like Violet Evergarden 451 VOTES If you've been keeping up with some of the new anime series dropping on Netflix, you've probably seen Violet Evergarden a fe...
#6 of 13 The Best Anime Like Orange 314 VOTES Orange is a Summer 2016 anime that left a lot of viewers sobbing by the end of it. One day, Naho Takemiya begins receiv...
#2 of 13 The 13 Best Anime Like Angel Beats! 865 VOTES If you enjoy crying your eyes out over plot twists and mysteries, you probably like Angel Beats! a lot. After all, what othe...
#6 of 13 The Best Anime Like Yuri!!! On Ice 748 VOTES Yuri!!! On Ice is one of the most popular anime of 2016, and it remains popular to this day. Yuri Katsuki is a professi...