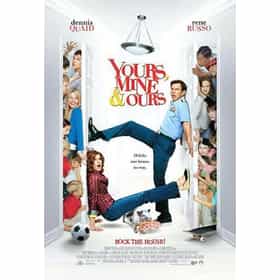 Yours, Mine and Ours

Yours, Mine & Ours is a 2005 American family comedy film about a family with eighteen children, ranging from 4 year old Ethan, to 18 year old William. Directed by Raja Gosnell, it stars Dennis Quaid and Rene Russo and was released on November 23, 2005. It is also a remake of the 1968 film of the same name, which starred Lucille Ball and Henry Fonda. The film was produced by Metro-Goldwyn-Mayer and Nickelodeon Movies, and was distributed by Paramount Pictures and Columbia Pictures. ... more on Wikipedia

Yours, Mine and Ours is ranked on...

Yours, Mine and Ours is also found on...