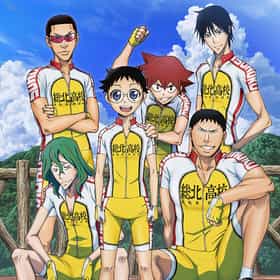 Yowamushi Pedal is a Japanese manga series written and illustrated by Wataru Watanabe. An anime television series adaptation began airing on October 7, 2013. Sakamichi Onoda is an otaku who has just entered high school. In middle school, Onoda did not have any friends with whom he could talk about his interests, and hopes to change that by joining his new school's anime club. However, he is crushed when he discovers the anime club has been disbanded due to lack of interest, and in order to reestablish the club, four new members must join. ... more on Wikipedia

Yowamushi Pedal is ranked on...

#290 of 891 The Best Anime Series of All Time 5.7M VOTES You love anime but what tops this list of the best anime series ever made? Top anime series include shows like Death Note, A...
#99 of 120 The Best Anime on Crunchyroll 613k VOTES It's the premiere anime streaming service, but what are the best anime shows on Crunchyroll? Sure you can watch on Netf...
#2 of 15 15 Anime That Really Didn't Need Fan Service 13.3k VOTES For devoted anime fans, there are few things more annoying than anime with too much fan service. While fan service can somet...
#14 of 61 The Best Sports Manga of All Time 25.6k VOTES Although it's hard to compare one sport to another, we're going to attempt a definitive ranking of the best sports manga of ...
#13 of 13 The 13 Best Anime Training Arcs of All Time 5.1k VOTES Training arcs aren't necessarily everyone's favorite part of an anime - but they don't have to be boring. In fact, there are...
#10 of 33 The Best Anime Like Kuroko's Basketball 742 VOTES There are a lot of great anime like Kuroko's Basketball, so let's rank them! After all, who doesn't love an enduring series ...
#3 of 22 The Best Anime Like Ace of Diamond 774 VOTES Need some recommendations for anime like Ace of Diamond? Obvious choices include Cross Game and One Outs, but let's tak...
#27 of 76 The Best Anime To Watch While Working Out 1.8k VOTES Believe it or not, there are many of us who watch anime while we exercise! For that reason, let's take a look at some great ...
#153 of 155 The Best Anime Soundtracks of All Time 84.7k VOTES What is the best anime OST of all time? That's not an easy question to answer, but thanks to your votes on this list, we're ...
#14 of 15 15 Anime Universes, Ranked By How Awesome It Would Be To Live In Them 20.9k VOTES There are plenty of reasons to love anime, especially because there are an incredibly diverse range of fantas...
#13 of 15 15 Random Anime You Should 100% Watch If You Haven't Seen Them 28.9k VOTES Welcome to Anime 102! You've already mastered the basics of anime, which includes shows like Death Note, Naruto, A...
#13 of 15 15 Anime Without Romance For When You're Sick Of Love 5.1k VOTES Sometimes it can feel like anime - and pop culture, in general - focuses way too hard on romance. Though some of the best an...
#13 of 13 14 Musical Live-Action Anime Adaptations You Didn't Know Existed 305 VOTES When you truly love an anime, it's natural to want to experience it in every medium possible. While many series receive&nbsp...
#12 of 15 The 15 Best Anime Sequels of 2018 571 VOTES If you're a long-time anime fan, one of the most exciting things about each new anime season is finding out which shows are ...
#12 of 16 The 16 Most Underrated Anime From The Past 6 Years 3.3k VOTES The past five years have seen a surge of awesome anime, so it's only natural that some truly good shows got lost in the...
#13 of 14 14 Times Anime Took Completely Boring Subjects and Made Them Exciting 3.8k VOTES One of the most amazing things about anime is the genre's uncanny ability to make even the most mundane subjects interesting...
#12 of 15 The Most Intense Anime Tournaments Of All Time 16.7k VOTES Anime with tournaments are tried and true staples of the medium. There's nothing like watching a character you've come to kn...
#14 of 20 The 20 Best Anime Opening Themes of 2018 1.4k VOTES One of the things that makes anime special is the opening theme song. Most Western shows either don't have a theme song at a...
#20 of 22 Anime To Look Forward To In 2017 12.3k VOTES A new year definitely means new anime seasons will be coming your way, and 2017 is primed to roll out some huge re...
#17 of 23 The Best Anime Like Initial D 275 VOTES Even if you're not that big of an anime fan, Initial D is perfect for anyone who's simply in love with cars. Following the s...
#27 of 32 The Best Anime Like Kenichi: The Mightiest Disciple 1.3k VOTES Need some Kenichi: The Mightiest Disciple anime recommendations? Since it's such an influential series, let's rank...
16 Actual Life Lessons I Learned From Watching Anime 24.2k VIEWS Many people think that watching anime is a waste of time, but those people are wrong. That's just an objective fact. Also, t...
#6 of 34 The 30+ Best Sports Anime of All Time 95.9k VOTES List of the best sports anime, voted on by Ranker's anime community. The anime sports genre boasts a huge array of amazing s...
#12 of 19 The Best Anime Like Eyeshield 21 492 VOTES Eyeshield 21 is notable for its popularity and how it helped raise the profile of American football in Japan. The manga seri...
#11 of 13 The Best Anime Like Yuri!!! On Ice 711 VOTES Yuri!!! On Ice is one of the most popular anime of 2016, and it remains popular to this day. Yuri Katsuki is a professi...
#12 of 13 The Best Anime Like My Hero Academia 5.1k VOTES My Hero Academia is one of the most popular anime to appear in recent years, but there are only so many episodes. Fans ...