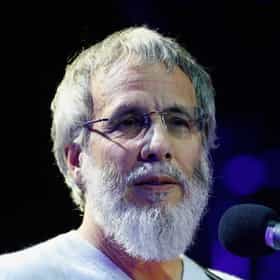 Yusuf Islam (born 21 July 1948), commonly known by his stage name Cat Stevens, and later Yusuf, is a British singer-songwriter and multi-instrumentalist. His musical style consists of folk, pop, rock, and, in his later career, Islamic music. He was inducted into the Rock and Roll Hall of Fame in 2014.His 1967 debut album reached the top 10 in the UK, and its title song "Matthew and Son" reached number 2 on the UK Singles Chart. Stevens' albums Tea for the Tillerman (1970) and Teaser and the Firecat (1971) were certified triple platinum in the US by the RIAA. His 1972 album Catch Bull at Four spent three weeks at number one on the Billboard 200, and fifteen weeks at number one ... more on Wikipedia

Cat Stevens is ranked on...

#58 of 139 The Most Undeserving Members of the Rock Hall of Fame 416.4k VOTES The most undeserving members of the Rock Hall of Fame are all respectable and successful musicians and bands but quite simpl...
#235 of 2,211 People who voted for Cat Stevens... People over 50 are 2x more likely to vote for this People on the West Coast are 2x more likely to vote for this The Best Rock Bands of All Time 3.3M VOTES Update: Follow Ranker's official New Rock 2020 playlist on Spotify! There are thousands of rock bands that have ...
#365 of 2,175 The Greatest Musical Artists of All Time 13.4M VOTES When VH1 polled fellow artists to name the greatest artists of all time, it seemed like a good idea---but in reality, the li...
#19 of 107 Which Bands Or Musicians Do You Most Want To See Before They (Or You) Kick The Bucket? 38.1k VOTES There's a certain energy associated with a live performance that just can't be replicated or synthesized by a single album. ...
#54 of 319 The Best Bands With Animal Names 33k VOTES The best bands with animals in their names criss-cross the music world with offerings from music genres like indie rock, cla...
#38 of 53 The Best Cat Things 2.8k VOTES Do you like cats? How about Kats? Like maybe an Everdeen or a Denning? Or maybe you like Catwoman, but also the old cartoon ...
#25 of 109 The Best Soft Rock Bands of All Time 78.5k VOTES This soft rock bands list ranks the best indie soft rock artists and musicians by votes. This list of top soft rock artist...
#41 of 65 The Best Folk Rock Bands of All Time 50.2k VOTES While folk music has been around for as long as spoken word music itself, folk rock rose became popular during the 1960s and...
#33 of 69 The 40+ Greatest Baritone Singers in Music History 44.1k VOTES Baritone singers have a gift of resonance in lower ranges, between the bass and the tenor voices. A baritone's voice is ofte...
Huge Rock Stars Who Gave Up Fame to Be Normal 362.5k VIEWS Creating a work/life balance is a struggle for almost everyone — ever wonder how rock stars do it? The truth is, a lot of th...
#9 of 43 The Best Acoustic Rock Bands/Artists 3.4k VOTES The foundation of rock music, debatably, is acoustic music. When many singer-songwriters sit down to work on a song or an id...
Famous People Who Converted To Islam 102.8k VIEWS Several famous rappers, actors, and athletes have converted to Islam. Some famous converts to the Muslim faith were previous...
75+ Famous Singers Who Are Cancers 118 VIEWS Which famous singers are Cancers? This list has all the famous Cancer singers, pop-stars, and country icons who were born be...
Famous Rhythm Guitarists 15.9k VIEWS A List of Famous Rhythm Guitarists with photos! These are musicians who are masters of their craft. While it is often the si...

Cat Stevens is also found on...