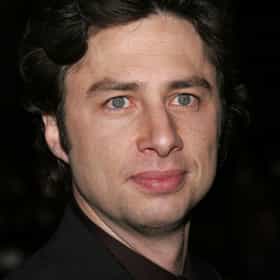 Zachary Israel Braff (born April 6, 1975) is an American actor, director, screenwriter and producer. He is best known for his role as J. D. on the television series Scrubs (2001–2010), for which he was nominated for the Primetime Emmy Award for Outstanding Lead Actor in a Comedy Series in 2005 and for three Golden Globe Awards from 2005 to 2007. He starred in The Broken Hearts Club: A Romantic Comedy (2000), The Last Kiss (2006), The Ex (2006) and In Dubious Battle (2016), and has done voice-work for Chicken Little (2005) and Oz the Great and Powerful (2013). In 2004, Braff made his directorial debut with Garden State, which he also wrote, starred in, and compiled the soundtrack album ... more on Wikipedia

Zach Braff is ranked on...

#882 of 1,148 The Best Actors in Film History 2.2M VOTES The best actors ever are ranked here in this list of the best actors in film history. These are the greatest actors ever to ...
#12 of 161 The Most Overrated Directors of All Time 39.1k VOTES List of the most overacted directors in the film industry of all times. Often the success, both critically and financially, ...
#6 of 7 In Case You Missed It: The Biggest Horror News From Feb. 17 - 21 281 VOTES This week: A new Evil Dead might be on the horizon, Eli Roth is set to adapt Borderlands, underrated horror classic Orphan g...
#12 of 26 The Absolute Worst Actors-Turned-Directors 3.5k VOTES Who's the worst actor turned director? And why can't actors just stick to acting in the first place? Well, famous people are...
#84 of 150 Who Do You Wish Would Guest Star on the Muppet Show? 7.6k VOTES Following their brand-new big screen Disney adventure, "The Muppets," Jim Henson's stable of beloved felt characte...
Every Person Who Has Hosted 'Saturday Night Live' 50.1k VIEWS Live from New York! It's Saturday Night! This is a list of all Saturday Night Live hosts, in reverse order,...
Actors Who Have Directed Films 12.2k VIEWS Several famous actors and actresses have directed films and many of their films have even gone on to win Academy Awards. A f...
Celebrities Who Have Dissed Justin Bieber 133.7k VIEWS In the relatively short number of years Justin Bieber has been around he's done an impressive amount of stupid things. When ...
Famous People of Scottish Descent 41.6k VIEWS List of famous people of Scottish descent loosely ranked by fame and popularity. Many famous people are of Scottish descent....
80+ Famous People of English Descent 13.1k VIEWS This list of famous people of English descent is loosely ranked by fame and popularity. Many famous people are of English de...
50+ Celebrities Who Suffer from Anxiety 154.1k VIEWS This list of celebrities who suffer from anxiety is loosely ranked by fame and popularity. Anxiety is a condition associated...
Everyone Sarah Chalke Has Dated 262 VIEWS Sarah Chalke became a household name with memorable roles in Roseanne and Scrubs. So you’d think there might be a lot of Sar...
22 Celebrities You Have Probably Seen On Reddit 806.6k VIEWS Browsing Reddit for hours on end is already fun, but it's even more exciting when there's the possibility that a famous cele...
50+ Actors Who Have Done Shakespeare in the Park 7.6k VIEWS Shakespeare in the Park festivals are popular all over the world. In cities like New York City, several famous actors and ac...
Celebrities Turning 40 in 2015 305.4k VIEWS It’s official: 40 is the new 20. Or at least the new 30. If this list of celebrities turning 40 in 2015 proves anything, it’...
The Cast Of 'Scrubs': Where Are They Now? 6.1k VIEWS TV shows come and go; some are rebooted or revived, some are largely forgotten, and some leave a lasting imprint on their fa...
50+ Famous Actors Who Are Aries 97 VIEWS Aries are passionate, bold, and ambitious, so it should come as no surprise that the below famous actors fall under that zod...

Zach Braff is also found on...