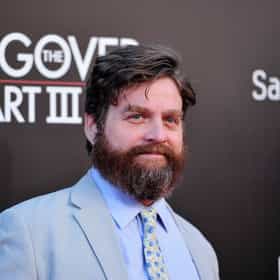 Zachary Knight Galifianakis (; born October 1, 1969) is an American actor, comedian, and writer who came to prominence with his Comedy Central Presents special in 2001 and presented his own show called Late World with Zach on VH1 the following year. He has also starred in films, such as The Hangover trilogy (2009–2013), Due Date (2010), The Campaign (2012), Birdman or (The Unexpected Virtue of Ignorance) (2014), Masterminds (2016), and The Lego Batman Movie (2017). Galifianakis is the host of the Emmy Award-winning talk show Between Two Ferns with Zach Galifianakis on the Funny or Die website. He starred in the FX series Baskets for which he was nominated for the Primetime Emmy Award ... more on Wikipedia

Zach Galifianakis is ranked on...

#440 of 1,148 The Best Actors in Film History 2.2M VOTES The best actors ever are ranked here in this list of the best actors in film history. These are the greatest actors ever to ...
#30 of 362 People who voted for Zach Galifianakis... People under 30 are 2x more likely to vote for this also upvote Lord of the Rings Franchise on The Best Movies of All Time The Funniest People of All Time 876.2k VOTES The funniest people of all time are a mix of actors, comedians, and even a few people who probably didn't start off trying t...
#32 of 32 32 Celebrities Who Have Insane Phobias 107.5k VOTES What are you afraid of? The dark? Failure? Death? Well, you'll feel a hundred times better about yourself when you see some ...
#22 of 22 22 Hilarious Pictures of Actors with No Eyebrows 6.4k VOTES It doesn’t matter if they play the best friend or the hot mom, actors and actresses are photogenic in one way or the other. ...
#30 of 82 The Greatest Actors Who Have Never Won an Emmy (For Acting) 29.4k VOTES What do Steve Carrell, Jerry Seinfeld, and Ed O'Neill have in common? No, it's not fame, fortune, or prestige. (Although t...
#12 of 33 Celebrities You Would Want To Get High With 20.3k VOTES Ever wonder what it would be like to ditch your buddy Jeff and smoke weed with someone who's actually interesting? For this ...
#13 of 31 The Best Old Man Bushy Beards in Pop Culture 601 VOTES Pop culture is awash with famous beards. From David Letterman's impressive post-Late Show scruff to notable beards...
#28 of 53 Who Should Replace Jon Stewart as Host of The Daily Show? 6.9k VOTES UPDATE: On March 30, 2015, Comedy Central announced that Trevor Noah, The Daily Show correspondent since December 2014 will ...
#8 of 20 All 20+ Actors Who Played Joker, Ranked Best To Worst By Fans 160.9k VOTES Throughout all the various Batman films, animated series, and video games, who do you think are the best Joker actors? ...
Every Person Who Has Hosted 'Saturday Night Live' 49.6k VIEWS Live from New York! It's Saturday Night! This is a list of all Saturday Night Live hosts, in reverse order,...
#11 of 156 The Best People Who Hosted SNL In The 2010s 1.4k VOTES Despite cast changes, Saturday Night Live in the 2010s found a new kind of balance and settled comfortably into their cold o...
#16 of 32 The Funniest Musical Comedians of All Time 924 VOTES This list contains information about the best musical comedians, loosely ranked by user votes. The best musical comedians ...
Famous People You Didn't Know Were Greek Orthodox 19.1k VIEWS The Greek Orthodox Church counts some famous figures among its members. Who is Greek Orthodox in Hollywood? A number of nota...
#2 of 39 The Funniest Alternative Comedians of All Time 1.4k VOTES   This list contains information about the best alternative comedians, loosely ranked by user votes. The best alt com...
Famous Actors Who Have Appeared In Music Videos 102.1k VIEWS This list contains information about famous actors who appeared in music videos, loosely ranked by fame and popularity. Seve...
40 Uncanny Celebrity Lookalikes That Are Hard to Believe 2.2M VIEWS They say that somewhere out there in the great wide world, everybody has a doppelgänger. A "doppelgänger&quot...
American Stand-Up Comedians: The Best Comics In the USA 169.1k VIEWS American comedians are some of the top rated stand up comedians in the world. These are the greatest stand up comedians this...
27 Celebrities Who Hate Being Famous 124.9k VIEWS Do celebrities like being famous? These celebs who hate fame sure don't! Though many children dream of growing up to be famo...
The Top 10 Funniest Bearded Comedians 146.7k VIEWS Some of the greatest comedians of all time have one thing in common: beards (the facial hair kind). Maybe it's something abo...
Famous People Named Zach & Zachary 31.6k VIEWS Have you ever realized how many famous people named Zach there are? We put together this list of celebrities named Zach to s...
Celebrity Lakers Fans 300.1k VIEWS Go team! This is a list of celebrity Lakers fans, ranked by fame and popularity. The Los Angeles Lakers basketball team has ...

Zach Galifianakis is also found on...