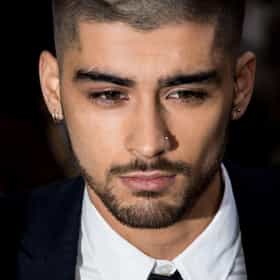 Zain Javadd "Zayn" Malik is an English singer and songwriter, and a previous member of the boy band One Direction. In 2010, Malik auditioned as a solo artist for the British television series The X Factor. After being eliminated as a solo performer, Malik was brought back into the competition, along with four other contestants, to form the group that would later become known as One Direction. During his time in One Direction, Malik, along with his bandmates, had released four commercially successful albums, performed on a worldwide tour, and won several awards. In March 2015, Malik's representative announced the singer's departure from the band. ... more on Wikipedia

Zayn Malik Loves and Hookups 40.7k views Who is Zayn Malik dating? Many famous women have dated Zayn Malik, and this list will give you more details about these luck...

Zayn Malik is ranked on...

Zayn Malik is also found on...