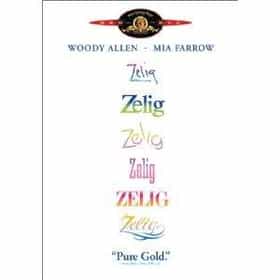 Zelig is a 1983 American mockumentary film written and directed by Woody Allen and starring Allen and Mia Farrow. Allen plays Leonard Zelig, a nondescript enigma who, out of his desire to fit in and be liked, takes on the characteristics of strong personalities around him. The film, presented as a documentary, recounts Zelig's intense period of celebrity in the 1920s and includes analyses from present day intellectuals. The film was photographed and narrated in the style of 1920s black-and-white newsreels, which are interwoven with archival footage from the era, and re-enactments of real historical events. Color segments from the present day include interviews of real and fictional ... more on Wikipedia

Zelig is ranked on...

#296 of 336 'Old' Movies Every Young Person Needs To Watch In Their Lifetime 978.8k VOTES If you're a younger millennial, you've probably heard your older friends and coworkers say things like "Hey, you g...
#724 of 992 The All-Time Greatest Comedy Films 414k VOTES The best comedy movies of all time are listed here, in one convenient list to be voted on and ranked by true fans. Thes...
#303 of 440 The Funniest '80s Movies 172.7k VOTES List of the funniest 80s movies. The best comedy films of the 1980s are listed here in order of greatness. Feel free to crea...
#42 of 147 The Best Movies of 1983 9.2k VOTES A list of the best movies of 1983, from highly anticipated sequels like " Return of the Jedi" to instant classics...
#8 of 69 People who voted for Zelig... are 6x more likely to vote for Annie Hall on this list are 17x more likely to vote for Sleeper on this list The Best Woody Allen Movies 7.3k VOTES The best Woody Allen movies of all time rank among some of the best movies of all time, so it's no surprise movie fans would...
#29 of 36 The Best Modern Black & White Movies 808 VOTES While they may seem like a thing of the past, many directors opted for a throwback aesthetic in these recent black and ...
#450 of 462 The Best Feel-Good Movies 431.9k VOTES Want to feel warm and fuzzy inside? This is a ranked list of the best feel-good movies that make us experience all the good ...
#303 of 341 The Best Movies All Hipsters Love 104.7k VOTES Grab your mason jars, mustache comb, and ironic glasses, it’s time to rank the most hipster movies of all time! As any self-...
#23 of 23 The Best Movies About The Great Depression, Ranked 4.8k VOTES The Great Depression was a difficult time in American history so it's no surprise there are a lot of films are based on the ...
#12 of 52 The Best Movies Directed by Woody Allen 2.7k VOTES List of all movies directed by Woody Allen ranked from best to worst with photos. Films directed by Woody Allen are listed h...
#25 of 51 The Best Mia Farrow Movies 785 VOTES List of the best Mia Farrow movies, ranked best to worst with movie trailers when available. Mia Farrow's highest grossing m...
#141 of 200 The Best PG Indie Movies 1.3k VOTES List of PG indie movies, ranked from best to worst with movie trailers when available. This list takes the best PG indie mov...

Zelig is also found on...