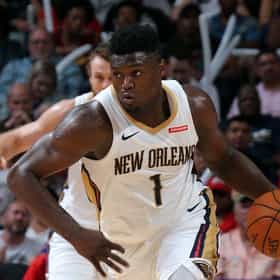 Zion Lateef Williamson (born July 6, 2000) is an American professional basketball player for the New Orleans Pelicans of the National Basketball Association (NBA). Listed at 6 ft 7 in (2.01 m) and 285 pounds (129 kg), he plays the small forward and power forward positions. Following a dominant freshman-year stint with the Duke Blue Devils, he was selected by the Pelicans first overall in the 2019 NBA Draft. Born in Salisbury, North Carolina, Williamson attended Spartanburg Day School, where he was a consensus five-star recruit and was ranked among the top five players in the 2018 class. He led his team to three straight state championships and earned South Carolina Mr. Basketball ... more on Wikipedia

Zion Williamson is ranked on...

#16 of 80 The Most Overrated Players In The NBA Today 13.1k VOTES The most overrated NBA players often get criticized by fans and the media for not earning the praise they get in some basket...
#16 of 85 The Most Likable Players In The NBA Today 14k VOTES The most likable NBA players can be anybody from tremendous superstars to beloved role players. Fans and peers often ma...
#43 of 71 The Best Sleeper Picks For Your Fantasy Basketball Team In 2019-2020 2.9k VOTES The best fantasy basketball sleepers can be the picks in any draft that could make or break your season. Everyone wants to t...
#309 of 320 The Top 100+ NBA Players Today 1.4M VOTES This list of the best basketball players in the NBA today ranks all of the league's current standout top players and NBA sta...
#9 of 17 The Best NBA Players Signed To Jordan Brand 212 VOTES A major shoe deal is one of the biggest endorsements an NBA star can get, and there are few brands in the game more respecte...
#4 of 60 Who Will Be The 2020 NBA Rookie Of The Year? 22.6k VOTES All the candidates for the 2019-20 NBA Rookie of the Year award have something to prove. But the one NBA rookie with the mos...
#1 of 62 2019 NBA Draft: Predicting The Number 1 Pick 1.6k VOTES With 2019 NBA Mock Drafts already underway be sure to vote up your favorites on this list. Obviously drawing from the best c...
#25 of 36 Which NBA Star Will Win His First Ring? 179 VOTES Every superstar in the NBA dreams of holding up the Larry O'Brien trophy at the end of the basketball season. But in the NBA...
#18 of 97 The Best Current NBA Dunkers 22.1k VOTES Who are the best dunkers currently in the NBA? Certainly, this list includes some of the best dunkers playing right now, and...
#32 of 52 The Best Current NBA Players Under 25 21.8k VOTES With the average age of an NBA player being 26 years old, the league's youngest players definitely deserve props. While youn...
#33 of 45 The Most Clutch Players In The NBA Right Now 15k VOTES Who are the best clutch players currently in the NBA? Certainly, this list includes some of the clutchest players pla...
#29 of 45 Who Will Win The 2020 NBA MVP Award? 18.6k VOTES Every 2020 NBA MVP award candidate is looking to leave is mark on the basketball world, and the top NBA MVP award candidates...
The Biggest Players In The NBA Right Now, Ranked 46.6k VIEWS The NBA is a league for big, tall men, and the heaviest basketball players in the sport in the 2019-20 season are throwing t...