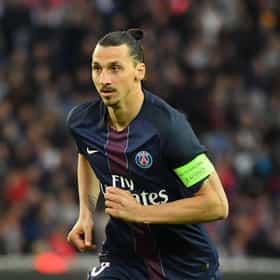 Zlatan Ibrahimović (Swedish pronunciation: [ˈslaːtan ɪbraˈhiːmʊvɪtɕ], Bosnian: [zlǎtan ibraxǐːmoʋitɕ]; born 3 October 1981) is a Swedish professional footballer who plays as a forward for LA Galaxy. Primarily a striker, he is a prolific goalscorer who is best known for his technique, creativity, strength, ability in the air, and his powerful and accurate striking ability. He is currently the third-most decorated active footballer in the world, having won 31 trophies in his career. He has scored over 530 senior career goals for club and country.Ibrahimović began his career at Malmö FF in the late 1990s, where consistent standout performances earned him a move to Ajax. At Ajax, ... more on Wikipedia

Zlatan Ibrahimović is ranked on...

#129 of 2,195 The Best Athletes Of All Time 34.1M VOTES The greatest athletes of all time: a list of the most dominant, iconic, famous players in the history of spor...
#31 of 1,397 People who voted for Zlatan Ibrahimović... also upvote Star Wars Franchise on The Best Movies of All Time The Best Soccer Players of All Time 3.6M VOTES Whether you call it soccer or football, this extensive list of the greatest soccer players of all time is ranked by&nbs...
#194 of 256 The All Time Ugliest Athletes 90.5k VOTES The all-time ugliest athletes prove once and for all that there is no connection between beauty and athletic ability. These ...
#11 of 36 The Weirdest Statues of Celebrities 11.3k VOTES Humans have used statues to memorialize their leaders for thousands of years. A statue immortalizes a mortal, ensuring that ...
#13 of 103 Coolest Soccer Players 50.8k VOTES The coolest soccer players of all time.                         ...
#15 of 117 The Funniest Professional Athletes 40.1k VOTES The funniest professional athletes are the stars of the NFL, NBA, MLB and NHL who don't just amaze fans with their athletic ...
#10 of 38 Who Is the Coolest Athlete in the World Right Now? 5.1k VOTES Determining the coolest athletes in the world right now can be pretty subjective, but we all have a general idea of cool, an...
#10 of 546 People who voted for Zlatan Ibrahimović... also upvote Paris Saint-Germain F.C. on The Best Current Soccer (Football) Teams The Best Current Soccer Players 1.7M VOTES The best current soccer players in the world are leading the charge as some of the most iconic stars in the history of ...
#3 of 262 The Best Soccer Players of 2013 286.6k VOTES Who were the best soccer players of 2013? Some of these top athletes in soccer, like Cristiano Ronaldo, are already listed a...
#39 of 124 Best Manchester United Players of All Time, Ranked 132.2k VOTES Whenever you think of soccer, the first team that's likely to come to mind is Manchester United. The club is by far and away...
#130 of 156 The Best Soccer Players from Germany 65.9k VOTES In your dream Germany national soccer team, which of the best German soccer players of all time would you pick? Would you ch...
#1 of 122 The Best Swedish Soccer Players of All Time 14.4k VOTES Ever wonder who are the best soccer players from Sweden of all time? Let soccer fans answer your question for you with this ...

Zlatan Ibrahimović is also found on...